The Mystery of the Jaredite Barges 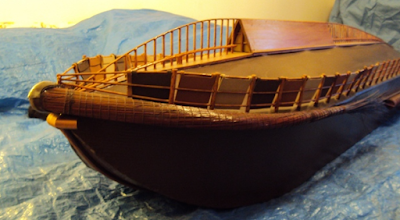 MORONI TRANSLATES THE RECORD OF ETHER

"And now I, Moroni, proceed to give an account of those ancient inhabitants who were destroyed by the hand of the Lord upon the face of this north country. And I take mine account from the twenty and four plates which were found by the people of Limhi, which is called the Book of Ether." (Ether 1:1-2)

Moroni, an Israelite, is giving us his account or translation of the record of Ether. Unfortunately, those who read the account often approach the record through the eyes and traditions our modern Western Culture and specifically modern Christianity. Unfamiliar with the prophetic school and traditions of ancient Israel, they read the account never recognizing the deep Israelite symbolism and language being used by the Israelite Moroni who is giving his translation of the Jaredite text of Ether.  The difficulty in understanding the record becomes even more pronounced when we then realize not only are we getting an Israelite translation of the record of Ether.  And sometimes, cultural symbols and meanings get lost in translation because the audience is not familiar with the culture and language.

The Backdrop of Ether: The Tower of Babel and the Confounding of Language:

One of the major themes of the record of Ether is that of language. In fact the record commences with Jared and his people leaving the Tower of Babel at the time when the languages were confounded:

The record then goes on to relate how Jared and The Brother of Jared along with their family and friends left the tower of Babel and were ultimately led to the seashore where they constructed barges to come to The Land of Promise. Many Christians mock The Book of Mormon for this account because of the description of the barges themselves, the strange method of obtaining air, and what appears to be irregularities in the account.

The record of Ether contains some of the richest and yet most sublime language and symbolism in The Book of Mormon. One these symbols is that of the Jaredite Barges.

THE MYSTERY OF THE BARGE: 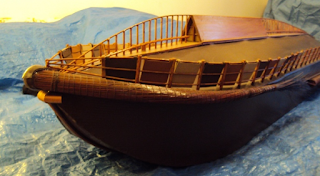 "And it came to pass that they did travel in the wilderness, and did build barges, in which they did cross many waters, being directed continually by the hand of the Lord. And the Lord would not suffer that they should stop beyond the sea in the wilderness, but he would that they should come forth even unto the land of promise, which was choice above all other lands, which the Lord God had preserved for a righteous people." (Ether 2:6-7)

It appears that the Jaredites actually built barges more than once.  In Ether 2:6-7 they built barges in which they did cross many waters, but in Ether 2:16 they were commanded by God to built barges like unto the ones they had already built:

"And the Lord said: Go to work and build, after the manner of barges which ye have hitherto built. And it came to pass that the brother of Jared did go to work, and also his brethren, and built barges after the manner which they had built, according to the instructions of the Lord. And they were small, and they were light upon the water, even like unto the lightness of a fowl upon the water."

The description of their barges is quite unique and often the most misunderstood;

And again in Ether 6:7 we also find the following description:

In Hebrew, the word for ark as in Noah's ark is the word tebah (תֵּבָה) and it means a vessel as in Noah's Ark or the basket vessel that carried Moses. It is not however a word that is usually translated as boat (ie. oniya, sefina, sira, klei shayit - boat, sailing vessels, etc).  In fact, Moroni is giving us a great functional description and definition of the Hebrew word tebah (as a container, dish, or vessel of some type that is used to hold or contain something):

While we often visualize their vessels in the likeness of our modern day sailing vessels, boats, or even some version of a submarine, the truth is that we are getting a descriptive definition of tebah to describe the functional aspect of the Jaredite Vessels which may be much more than just the peshat or child's story of a sail boat, boat, or even a submarine.

In fact, recent archaeological discoveries in the Dead Sea Scrolls give a very different description of Noah's ark:

"Haaretz reported that the new reading of the fragments has changed our understanding about Noah's Ark. Thanks to the high-resolution imagery, a word following the phrase “the ark’s tallness” had previously been illegible. However, the new scans showed that the correct words is ne’esefet, meaning “gathered,” which according to researcher Dr. Alexey Yuditsky, means that the ark’s ribs were gathered together at the top in the shape of a pyramid. Dr Yuditsky said that the Septuagint, a Greek translation of the Bible dating to the third century BC, used a Greek verb with a similar meaning to describe the Ark. Moreover, medieval authors like Maimonides suggested that the ark's roof was pointed" (https://www.ancient-origins.net/news-history-archaeology/dead-seas-scrolls-reveal-noahs-ark-was-shaped-pyramid-006204) 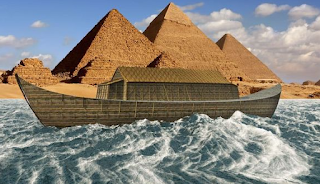 "And this is the fashion which thou shalt make it of: The length of the ark shall be three hundred cubits, the breadth of it fifty cubits, and the height of it thirty cubits." (Genesis 6:15)

The description of the measurement's of Noah's ark contains a concealed teaching.  If we take the measurement of the ark and equate them with their Hebrew Numerical equivalent we get the following:

Here we find the letters that make up the Hebrew word Lashon (tongue or language-see Genesis 10:5). In Jewish tradition and teachings, teachers like the Baal Shem Tov often related the construction of Noah's Ark with the construction of words.
That there were 8 vessels is also significant in that the number 8 equals to the Hebrew Letter Chet (חֵ) which not only signifies a fence but also language or words. This then begs the question as to what is the connection between Noah's Ark, Jaredite Barges and Language/Words?
As Moroni equates the Jaredite Vessels with Noah's ark, then what we find is an ancient teaching in Ether regarding vessels of language or words that are illuminated with light/fire.

The Brother of Jared - Calling Upon THE NAME:

The Lord then goes on to explain to the Brother Of Jared:

"And the brother of Jared repented of the evil which he had done, and did call upon the name of the Lord for his brethren who were with him. And the Lord said unto him: I will forgive thee and thy brethren of their sins; but thou shalt not sin any more, for ye shall remember that my Spirit will not always strive with man; wherefore, if ye will sin until ye are fully ripe ye shall be cut off from the presence of the Lord. And these are my thoughts upon the land which I shall give you for your inheritance; for it shall be a land choice above all other lands." (Ether 2:15)

This same phrase "my spirit will not always strive with man" is also evoked in context of Noah and his children after the flood:

"And the LORD said, My spirit shall not always strive with man, for that he also is flesh: yet his days shall be an hundred and twenty years" (Genesis 6:3)

Here the word for strive is the Hebrew word din connected with the idea of judgment but meaning to plead with man or abide with man.  The idea is that God's spirit will not always plead with or abide with man.  The ancient understanding is that we as men and women must the reconnect with Heaven to draw down the Spirit of Heaven to earth.  Calling upon the name is the science or discipline of doing so.  This is done with words, but not just any words- ancient words infused with light or fire.

It is in this light that we will begin to discover the meaning of the words spoken of Enoch:

"And so great was the faith of Enoch that he led the people of God, and their enemies came to battle against them; and he spake the word of the Lord, and the earth trembled, and the mountains fled, even according to his command; and the drivers of water were turned out of their course; and the roar of the lions was heard out of the wilderness; and all nations feared greatly, so powerful was the word of Enoch, and so great was the power of the language which God had given him.

There also came up a land out of the depth of the sea, and so great was the fear of the enemies of the people of God, that they fled and stood afar off and went upon the land which came up out of the depth of the sea. And the giants of the land, also, stood afar off; and there went forth a curse upon all people that fought against God; And from that time forth there were wars and bloodshed among them; but the Lord came and dwelt with his people, and they dwelt in righteousness." (Moses 7:13-16)

( Part 2- Barges - Holes for Breathing, and The Finger of Lord)

Posted by Mormon Yeshiva at 1:44 PM No comments:

Deseret, Deborah, and The Mystery of The Honeybee

Posted by Mormon Yeshiva at 1:29 PM No comments: