THE BOOK OF MORMON AND THE FOUR ETERNAL WORLDS (Part 1)

Unlocking the mysteries of the Book of Mormon requires that we put on our Israelite eyeglasses.  In doing so we begin to see the hidden dimension of the Book of Mormon as a record designed to communicate the Science of the Fathers.  One such marker is the phrase "And my Father dwelt in a tent" that appears 4 times in the account of 1st Nephi (see 1 Nephi 2:15, 1 Nephi 9:1, 1 Nephi 10:16, 1 Nephi 16:6).

These 4 utterances by Nephi serve as prophetic markers that correlate to 4 Worlds of the Tree of  Life and the mysteries of ascension to God demonstrated by the following: 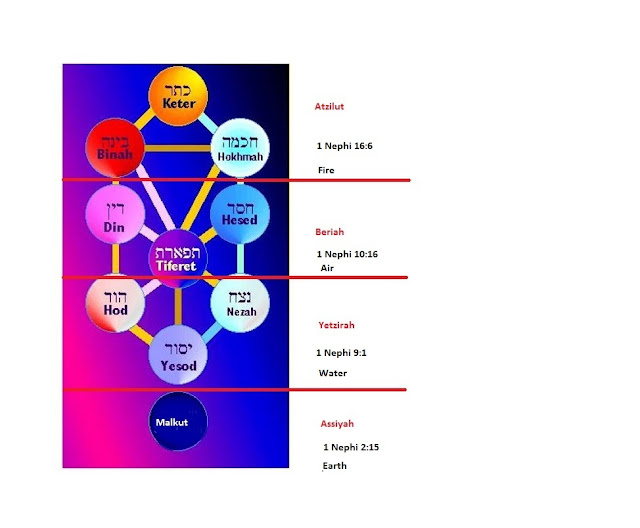 ATZILUT– The World from which all things emanate.  This is sometimes called the timeless or eternal world.  The place of no separation from God.  It corresponds to the element of Fire.  In the scriptures it corresponds to the Sod level of interpretation. Its human expression is the embrace of oneness with the divine. It is the world through which all other worlds are sustained.

BERIAH– The World of Creation also called the realm of the Divine Throne.  This world is sometimes called the world shaped by wisdom and understanding.  The world where intelligence senses its own existence.  It corresponds to the element of Air.  In the scriptures it corresponds to the Derash level of interpretation.  Its human expression is reasoning, contemplation, intellect. Here is the divine expression of Mercy, Power, and Beauty.

YETZIRAH– The World of Formation.  The world where form and shape begins. It corresponds to the element of Water. In scriptures it corresponds to the Remez level of interpretation.    Here is the divine expression of Endurance/Long suffering, Glory/Power, and Foundation (the balancing of the masculine and feminine).

The base of the Tree (starting at the bottom)  commences with this world or Kingdom (Malkut- symbolized by earth/rock) and is represented by world of Assiyah (based on the Hebrew passage of Isaiah 43:7).

Nephi's account commences with the ecstatic vision of Lehi wherein a pillar of Fire (Atzilut) comes and dwells upon a Rock (Malkut). THE ASCENT THROUGH THE 4 WORLDS IS WHAT IS KNOWN AS BEING BORN AGAIN.

The account of Lehi in the record of his son Nephi is a living record of this knowledge passed down by the Fathers. It contains the unadulterated principles of true ascension and connection with Heaven.  It contains the path whereby all may connect with Heaven above and manifest Heaven (even Zion) here on earth.

“Wherefore it came to pass that my father, Lehi, as he went forth prayed unto the Lord, yea, even with all his heart, in behalf of his people. And it came to pass as he prayed unto the Lord, there came a pillar of fire and dwelt upon a rock before him; and he saw and heard much; and because of the things which he saw and heard he did quake and tremble exceedingly.” (1 Nephi 1: 5-6)

Nephi commences his narrative with the advent of many prophets coming to the people of the great city of Jerusalem prophesying that they must repent or be destroyed. (1 Nephi 1:4)  As a result of the conditions of sin and iniquity that existed among the people, the Prophet Lehi went forth and prayed unto the Lord with all his heart (kavanah- desire) in behalf of his people.  In doing so, Lehi exercised the great principle revealed by the Fathers- As Above so below, As below so above.  His stirring prayer of desire here on earth caused a stirring in Heaven.  In doing so he became a vessel to contain the light of God to bestow upon others for life and salvation.

The response from the throne of God in the World of Atziluth is demonstrated in the pillar of fire (the corresponding element of Atzilut) that came down and dwelt upon a rock (Asiyah-earth).  As passed down by the Fathers it has been taught that the things of Atzilut or the Sod level of experience are of such a great and marvelous nature that they are beyond the faculties of the five human senses.  The truth of this teaching is attested to as “… because of the things which he saw and heard he did quake and tremble exceedingly.  And it came to pass that he returned to his own house at Jerusalem; and he cast himself upon his bed, being overcome with the Spirit and the things which he had seen.” (1 Nephi 1: 6-7)

“And being thus overcome with the Spirit, he was carried away in a vision, even that he saw the heavens open, and he thought he saw God sitting upon his throne, surrounded with numberless concourses of angels in the attitude of singing and praising their God.” (1 Nephi 1:8)

By offering his prayer of real intent or desire, Lehi became a vessel for the spirit of God to fill to bestow upon others.  In becoming this vessel, he was carried away in a vision and ascended into the World of Beriyah.  This is realm of the Divine Throne that was sometimes referred to as the High Place of Eden where Angels (Malakim) of the highest order are to be found in the attitude of worshipping God.  This same World is also found in the visions of John (Rev. 4:2-4, 7:10-11), Isaiah (6:1), Ezekiel (1:1,26), and Alma (36:22) among many others.

“And it came to pass that he saw One descending out of the midst of heaven, and he beheld that his luster was above that of the sun at noon-day. And he also saw twelve others following him, and their brightness did exceed that of the stars in the firmament.” (1 Nephi1:9-10)

It is in this world of Beriyah that the Sephirah of Tiphareth (Beauty) is expressed.  Tiphareth/ Tiferet is typified by the sun and corresponds to the Messiah of Israel.

As Beauty is an attribute of God it is typified by Messiah. In Messiah the true beauty of God is found wherein the power of Justice and attribute of Mercy is balanced wherein Justice is not robbed and Mercy claimeth her own.” (Alma 42:24)

“And they came down and went forth upon the face of the earth; and the first came and stood before my father, and gave unto him a book, and bade him that he should read. And it came to pass that as he read, he was filled with the Spirit of the Lord.

And he read, saying: Wo, wo, unto Jerusalem, for I have seen thine abominations! Yea, and many things did my father read concerning Jerusalem—that it should be destroyed, and the inhabitants thereof; many should perish by the sword, and many should be carried away captive into Babylon.

And it came to pass that when my father had read and seen many great and marvelous things, he did exclaim many things unto the Lord; such as: Great and marvelous are thy works, O Lord God Almighty! Thy throne is high in the heavens, and thy power, and goodness, and mercy are over all the inhabitants of the earth; and, because thou art merciful, thou wilt not suffer those who come unto thee that they shall perish!

And after this manner was the language of my father in the praising of his God; for his soul did rejoice, and his whole heart was filled, because of the things which he had seen, yea, which the Lord had shown unto him.” (1 Nephi 1:11-15)

In receiving the book from the One who stood before Lehi, we find the formation of a spiritual creation and prophecy of judgment that God would declared upon Jerusalem that would find its fulfillment in the physical world.  It is in this world of formation that we find the faculties of the heart (compassion, fear, and desire) as exemplified in the prophesied destruction of Jerusalem and merciful compassion extended to those that come unto the Messiah.

“Therefore, I would that ye should know, that after the Lord had shown so many marvelous things unto my father, Lehi, yea, concerning the destruction of Jerusalem, behold he went forth among the people, and began to prophesy and to declare unto them concerning the things which he had both seen and heard.

And when the Jews heard these things they were angry with him; yea, even as with the prophets of old, whom they had cast out, and stoned, and slain; and they also sought his life, that they might take it away. But behold, I, Nephi, will show unto you that the tender mercies of the Lord are over all those whom he hath chosen, because of their faith, to make them mighty even unto the power of deliverance.” (1 Nephi 18-19)

Assiyah is the World of Action.  It is the world in which we live.  After Lehi had connected with God and his spirit descended back into this world, he took the light that he received and began to bestow this light of salvation upon others.  In this case the Jews in Jerusalem.  Like the prophets of old he stood as a vessel of light in the darkness and the darkness comprehended it not.  As a result they sought to kill the light because it testified of their awful and fallen condition.

All rights reserved. No portion of this article may be reproduced in any form without permission from the author, except as permitted by U.S. copyright law.
Posted by Mormon Yeshiva at 7:53 AM