THE HIDDEN MEANING OF NEPHI'S PRAYER: THE JOURNEY OF THE SOUL 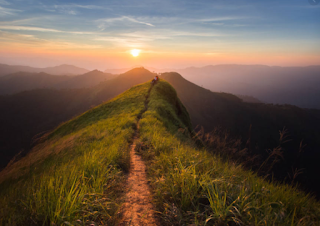 "The soul has a hidden journey.  Its' trodden path we are meant to take.  It's first step commences with faith.  It's wilderness is endured with Hope. It's strength is renewed in pure love even as its fulfillment is found in the knowledge of YHVH."

And upon these I write the things of my soul, and many of the scriptures which are engraven upon the plates of brass. For my soul delighteth in the scriptures, and my heart pondereth them, and writeth them for the learning and the profit of my children." (2 Nephi 4: 14-16)

The Book of Mormon while often considered a historical record by some believers actually falls into the category of Jewish Sacred Writing.  Sacred Writing is not a linear account of day by day activities enumerating the various events that went on in a nation.  It is writing that draws upon historical events but written in a way to communicate multi-dimensional teachings.  In other words, rather than serving as a comprehensive historical account the record is actually meant to draw upon historical figures and events to communicate divine truths to the souls who read the various accounts.

This truth is established in the writings of the Prophet Nephi where he expresses that he had written the "more history part" upon other plates, but on these plates he wrote the things of his soul. In these verses we find a beautiful Hebrew poetic structure and play on words subtly communicated. The word for soul in Hebrew is the word Nephesh (Nun-Peh-Shin) which shares the same parent root as Nephi's own name (Nun-Peh).  We see this concept demonstrated even as God breathed into Adam the breath of life:

"And the LORD God formed man of the dust of the ground, and breathed into his nostrils the breath of life; and man became a living soul (Nephesh)." (Genesis 2:7)

So if we stand back from the words to view the tapestry being painted, Nephi is writing the things of the Nephesh (soul).  Considering this teachings we then prophetically approach the Books of Nephi not only as the account of his journey from Jerusalem to the Land of Promise, but also as The Soul's Journey from from Jerusalem to the Land of Promise- or the journey back into the presence of God.

Nephi's Prayer and the Five Stages of The Soul

In Hebrew there are five stages of the soul or nephesh. In ascending order they are nephesh, ruach, neshama, chaya and yechida.  Expressed together they are called NaRaNHaY.  In fact if you look very closely at the expression you will notice the expression of consonants in the word NRNHY or as expressed in English by a very famous author- NARNIA.  Perhaps C.S. Lewis books entitled The Chronicles of Narnia are not just a child's story but something much more profound- The Chronicles of The Journey of The Soul?

The word nephesh means life as in life force.  It is actually the lowest part of ourselves that we would identify as the natural man/woman or the ego.  This is our outward conscious mind. Our personalities as Robert, Mary, Tom, Elizabeth, Harry, or Harriet.  This is the experience of the natural man in our fallen world.

This stage is expressed in Nephi's prayer of lament:

Ruach means wind or spirit.  We see this expressed in words such as the Ruach ha Kodesh (Holy Spirit) or Ruach Elohiym (Spirit of God). The Ruach is connected with emotion which like wind blows and slows and is in constant motion. It is a person true feelings and motivations of the heart. This is what is referred to in Jewish literature as "the toil of the heart" where one comes to love God with all their heart.

We see this stage of the Soul in Nephi's Lament as follows:

"nevertheless, I know in whom I have trusted. My God hath been my support; he hath led me through mine afflictions in the wilderness; and he hath preserved me upon the waters of the great deep. He hath filled me with his love, even unto the consuming of my flesh. He hath confounded mine enemies, unto the causing of them to quake before me." (2 Nephi 4:19-21)

The Neshama is one's spirit body or higher self that is eternally connected to and in the presence of God.  It is the place where the spirit within man ascends every night during sleep and returns with light and knowledge to aid in one's journey here on earth.

This stage is expressed in Nephi's Lament as follows:

Chaya means life. It is the stage of the soul that represents something beyond our intellectual comprehension of principles and the things of the spirit. It is the place of the Heavenly Eden where stand many orders and concourses of angels.

"And by day have I waxed bold in mighty prayer before him; yea, my voice have I sent up on high; and angels came down and ministered unto me."  (2 Nephi 4:24)

Yechida is the essence of the soul or condition of oneness or unity. It is the condition of those who ascend to the Mountain of the Lord and whose experience cannot be communicated to the intellect or thru the five senses.  Indeed it must be experienced to be understood. A person in this stage comes to a truth of all things.

This stage is expressed in Nephi's Lament as follows:

"And upon the wings of his Spirit hath my body been carried away upon exceedingly high mountains. And mine eyes have beheld great things, yea, even too great for man; therefore I was bidden that I should not write them."

Posted by Mormon Yeshiva at 3:37 PM