Pathways Of The Prophetic- Dreams, Visions, And Anchoring The Soul

"And it shall come to pass afterward, that I will pour out my spirit upon all flesh; and your sons and your daughters shall prophesy, your old men shall dream dreams, your young men shall see visions" (Joel 2:28)

While our language skills develop as we mature, our first and primary level of communication is the world of pictures. If I were to say a fruit that is orange and sweet it might conjure pictures of a juicy sweet orange or tangerine.  Or if I were to say a feathered creature flying in the air it might conjure pictures of an eagle soaring in the sky or a hawk gliding overhead.  In the world of the prophetic words such as 'orange' or 'eagle' were constructs to represent these images. Pictures are the most fundamental level of communication.

It was taught in ancient Israel that dreams were messages from the worlds above.  It was said by some sages that a dream left uninterpreted was like a scroll left unread.  When we enter the world of the visionary or dreamer, information is communicated in images and symbols. Spiritual communication does not follow the same rules as our natural mind. The language of images and symbols was considered the language of heaven and divine messengers.  The gift of the angelic visitation, the dream, or the visionary was considered so powerful and elevated that prophets would declare:

"For since the beginning of the world men have not heard, nor perceived by the ear, neither hath the eye seen, O God, beside thee, what he hath prepared for him that waiteth for him." (Isaiah 64:4)

"And after this manner do they bear record: The eye hath never seen, neither hath the ear heard, before, so great and marvelous things as we saw and heard Jesus speak unto the Father..." (3 Nephi 17:16)

Divine communication in visions or dreams was part of the pathway of the prophetic. The visions were so powerful to the receiving prophet that they would be almost overwhelming in some cases leaving the body of the prophet without strength:

"And it came to pass that he returned to his own house at Jerusalem; and he cast himself upon his bed, being overcome with the Spirit and the things which he had seen. And being thus overcome with the Spirit, he was carried away in a vision, even that he saw the heavens open, and he thought he saw God sitting upon his throne, surrounded with numberless concourses of angels in the attitude of singing and praising their God." (1 Nephi 1:7-8) 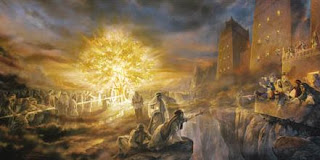 The ancient Schools of the Prophets preserved this understanding of the power of images, but they also taught the discernment of these communications as well. Significant training was given to the student to teach them to discern between the the common thoughts of the mind and true communications from God. This pathway of ascension and discernment was typified in scriptural language using images or symbols of the storm, clouds, fire, and darkness symbolizing the Klipot, barrier, or veil.  The instruction included the methods of  the submissive will by which one parted the veil.

YHVH- An Anchor To The Soul


One of the key anchors of the soul in its ascent taught in the ancient Schools of the Prophets was God's name YHVH. Whenever a prophet walked the pathway of the prophetic and came up against the darkness, cloud, barrier, veil (klipot) they were taught how to overcome this barrier.  To submit through this veil or barrier they would perform the prophetic technique involving the a meditation/prayer of calling on the name of God- YHVH. The prophet Lehi gives an example of this submission past the veil of darkness by meditating or calling upon YHVH:

This same manner of submitting past the veil was experience by over 300 Lamanites who came to kill the Prophets Nephi and Lehi in the Book of Helaman.

"And it came to pass that the Lamanites said unto him: What shall we do, that this cloud of darkness may be removed from overshadowing us?

And Aminadab said unto them: You must repent, and cry unto the voice, even until ye shall have faith in Christ, who was taught unto you by Alma, and Amulek, and Zeezrom; and when ye shall do this, the cloud of darkness shall be removed from overshadowing you.

And it came to pass that they all did begin to cry unto the voice of him who had shaken the earth; yea, they did cry even until the cloud of darkness was dispersed.

And it came to pass that when they cast their eyes about, and saw that the cloud of darkness was dispersed from overshadowing them, behold, they saw that they were encircled about, yea every soul, by a pillar of fire." (Helaman 5:40-43)

"Now, this was what Ammon desired, for he knew that king Lamoni was under the power of God; he knew that the dark veil of unbelief was being cast away from his mind, and the light which did light up his mind, which was the light of the glory of God, which was a marvelous light of his goodness—yea, this light had infused such joy into his soul, the cloud of darkness (klipot) having been dispelled, and that the light of everlasting life was lit up in his soul, yea, he knew that this had overcome his natural frame, and he was carried away in God" (Alma 19:6)

As we surrender our will to the will of God, sacred space is created in the heart preparing the student to receive the greater things of God.  The observance of the commandments that comes from this submission of the will is the fruit meet or that comes from this submission. In doing so the darkness of the mortal world falls away and the student of the prophetic is then carried away in God.  One who has no real desire or intent to surrender their will to receive the things of God will never pass the veil that separates this world from the world above.