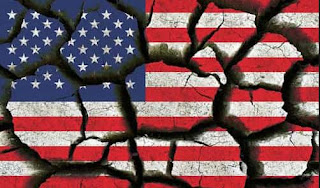 "And the people were divided one against another; and they did separate one from another into tribes, every man according to his family and his kindred and friends; and thus they did destroy the government of the land." (3 Nephi 7:2)

Many people view the idea of Zion with religious and communal eye glasses.  Strangely enough if we were to examine closely the Israelite idea of Zion we would find that it was a place where God's people were secured in the blessings of life and liberty.  It was a place where peace and safety for all of God's people would be secured under the rule of his law- so that equity, liberty, and justice would be meted out for all being blind to class, wealth, or color. Ironically we could summarize Zion as follows:

" ONE NATION, UNDER GOD, INDIVISIBLE, WITH LIBERTY AND JUSTICE FOR ALL"

Even in this pledge of allegiance we hear the echoes of Israel as recorded in the Shema:

"2 That thou mightest fear the Lord thy God, to keep all his statutes and his commandments, which I command thee, thou, and thy son, and thy son’s son, all the days of thy life; and that thy days may be prolonged.

3 Hear therefore, O Israel, and observe to do it; that it may be well with thee, and that ye may increase mightily, as the Lord God of thy fathers hath promised thee, in the land that floweth with milk and honey.

4 Hear, O Israel: The Lord our God is one Lord:

6 And these words, which I command thee this day, shall be in thine heart:

8 And thou shalt bind them for a sign upon thine hand, and they shall be as frontlets between thine eyes.

9 And thou shalt write them upon the posts of thy house, and on thy gates." (Deuteronomy 6)

This blessing of Oneness under God and his laws is preserved by the obedience of the People to God's laws. What we are witnessing now in this country is division-division based on wealth, race, etc.  This division is part of the covenant curses coming upon the Land.  It is also a part of the plan of the Adversary and his secret combination that seeks to overthrow the liberty of all lands as described in Ether:

" Wherefore, the Lord commandeth you, when ye shall see these things come among you that ye shall awake to a sense of your awful situation, because of this secret combination which shall be among you; or wo be unto it, because of the blood of them who have been slain; for they cry from the dust for vengeance upon it, and also upon those who built it up.

For it cometh to pass that whoso buildeth it up seeketh to overthrow the freedom of all lands, nations, and countries; and it bringeth to pass the destruction of all people, for it is built up by the devil, who is the father of all lies; even that same liar who beguiled our first parents, yea, even that same liar who hath caused man to commit murder from the beginning; who hath hardened the hearts of men that they have murdered the prophets, and stoned them, and cast them out from the beginning."  Ether 8:24-25.

The division we see now in our nation is fulfillment of prophecy as declared in the Book of Mormon.  While people are being divided by economic forces, media forces, and subversive governmental forces a war is being waged for the very soul of this country.  If we do not awaken to our awful situation, this nation will creep closer and closer to levels of division and warfare that will make the Civil War look like a day in the park.  We will see race pitted against race, men pitted against women, women pitted against men, wealth pitted against the workers, and children against parents.  In a nation once united we will see the emergence of governments and city states- some of whom will seek to maintain the laws of liberty and freedom while others will seek to establish tyrants and kingmen. Even as the forces of division and violence increase there will be those who will be led to set apart places where civilization is maintained and freedom will be secured. There are many at this time whom God has lead out from those areas that are the more populous and wicked to places that will serve as states or nations of protection appointed by God for those in whose hearts still burn the fire of the Gospel of Jesus Christ and the love of Liberty.  It will be those who understand that liberty was purchased with the price of sacred life and can only be preserved by eternal vigilance and the establishment of God's laws.  If our nation continues to walk the path it is walking, a day will come when confidence will be lost and God's wings of protection will be withdrawn.  It will then be said again:

"And only a few years have passed away, and they were a civil and a delightsome people. But O my son, how can a people like this, whose delight is in so much abomination— How can we expect that God will stay his hand in judgment against us?" (Moroni 9:12)

There is a path to healing.  There is a path to covenant rebirth.  But I wonder how many will hear this familiar cry, "O that we had repented before this great and terrible day, and then would our brethren have been spared, and they would not have been burned in that great city New York.

And in another place they were heard to cry and mourn, saying: O that we had repented before this great and terrible day, and had not killed and stoned the prophets, and cast them out; then would our mothers and our fair daughters, and our children have been spared, and not have been buried up in that great city Los Angeles. And thus were the howlings of the people great and terrible." (see 3 Nephi 8:24-25)
Posted by Mormon Yeshiva at 8:07 AM