THE DEATH OF NATION? 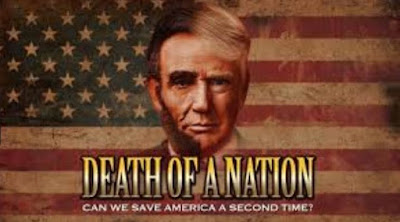 " And now, we can behold the decrees of God concerning this land, that it is a land of promise; and whatsoever nation shall possess it shall serve God, or they shall be swept off when the fulness of his wrath shall come upon them. And the fulness of his wrath cometh upon them when they are ripened in iniquity. For behold, this is a land which is choice above all other lands; wherefore he that doth possess it shall serve God or shall be swept off; for it is the everlasting decree of God. And it is not until the fulness of iniquity among the children of the land, that they are swept off." (Ether 2:9-10)

This land is a covenant land with covenant stipulations. We can make political and emotional appeals all day, but in the end they may not matter when the terms of God's covenant are broken and the consequences come about on everyone-- gay, straight, black, white, Jew, Gentile.  Often times political propaganda appeals to the emotions and ideals of equal rights, but lawlessness is lawlessness (iniquity) no matter what label it comes under. The results of sustaining any form of iniquity are never good.

The Land of the United States of America is a land of promise.  In a Hebraic context a "land of promise" is a covenant land grant.  As such the conditions for dwelling in the land are very different as all people who reside on the land grand must obey the terms God has set out for residency. The result of breaking the covenant is forever the same--THE CURSES OF THE COVENANT ARE POURED OUT UNTIL THE PEOPLE EITHER REPENT OR ARE SWEPT OFF!


The Point of No Return- The Sorrowing of the Damned

There is a point of no return that is coming in fact it may already be here.  It is the point where it becomes unlawful to recommend the people to God because they sorrow that they can no longer continue in their lawlessness (iniquity) instead of sorrowing unto repentance.  Let's see how we compare to the Nephites in their condition of iniquity (Mormon 2):

10 And it came to pass that the Nephites began to repent of their iniquity, and began to cry even as had been prophesied by Samuel the prophet; for behold no man could keep that which was his own, for the thieves, and the robbers, and the murderers, and the magic art, and the witchcraft which was in the land.


*No man could keep that which was his own-- whether it be through financial impropriety, speculative bubbles, or conspiracy the peoples wealth becomes slippery.  Sounds familiar to American Economy!

*Thieves, robbers, and murderers-- Interesting as in the days of the Nephites the Gadianton robbers had gained control of the Government and the Church.  It is easy for us to accept the robbers controlling the government, but the reality is that they have also gained control of the church (body of believers and their institutions) as well.

*Magic Art and Witchcraft - Spiritualism, Divination, and  other forbidden practices fill our land even as people lose faith.  Those things which were instituted by God are put down even as evil is declared "good".

11 Thus there began to be a mourning and a lamentation in all the land because of these things, and more especially among the people of Nephi.

12 And it came to pass that when I, Mormon, saw their lamentation and their mourning and their sorrow before the Lord, my heart did begin to rejoice within me, knowing the mercies and the long-suffering of the Lord, therefore supposing that he would be merciful unto them that they would again become a righteous people.

*Are we seeing the waves of lamentation, mourning, and sorrowing that lead to the demise of our nation?  Right now many are seduced by comfort, complacency, and Apathy.  Remember-- "ALL IS WELL IN ZION!  STAY ASLEEP! YOU ARE SAFE BECAUSE YOU ARE IN THE ONE TRUE _____________________  (FILL IN THE BLANK:  CHURCH/GROUP/RELIGION!)

13 But behold this my joy was vain, for their sorrowing was not unto repentance, because of the goodness of God; but it was rather the sorrowing of the damned, because the Lord would not always suffer them to take happiness in sin.

14 And they did not come unto Jesus with broken hearts and contrite spirits, but they did curse God, and wish to die. Nevertheless they would struggle with the sword for their lives.

15 And it came to pass that my sorrow did return unto me again, and I saw that the day of grace was passed with them, both temporally and spiritually...."

Like God's judgment upon the Tower of Babel we are about to see judgments of like severity poured out upon our Nation.  Even in the midst of the darkness of impending judgment there is the possibility of the light of salvation.  What will it take--Men and Women who will walk in the Path of Covenant Intercessors like the Brother of Jared.  Rather than choosing death they choose life in taking upon them the name of Christ--they choosing repentance rather than destruction.  Make no mistake the judgments are sure, but an Exodus under the covering of the God of Israel is still available.  Before that day comes though, there must be people like the Brother of Jared who have have walked in the path of God's covenant, interceded for their people under the terms of the covenant, and obtained the Rest of God. I guess in the end the doctrine of the two ways still holds firm as in the ancient days-- Sorrowing unto true repentance or the sorrowing of the damned.  It seems we still have a choice.

Many people are looking to the President, The Senate, The House of Representatives, etc to "save us", but in the end the responsibility resides with the people and the individual effort and choices we make every day.  The cause of Zion is not just a religious matter but the matter of a Nation who upholds God and the ideology:


"ONE NATION UNDER GOD, INDIVISIBLE, WITH LIBERTY AND JUSTICE FOR ALL!"

*The title of this article is called "Death of Nation" intentionally.  The path of repentance and the path of destruction is the same for all Nations with whom God has extended covenant.

All rights reserved. No portion of this article may be reproduced in any form without permission from the publisher, except as permitted by U.S. copyright law.
Posted by Mormon Yeshiva at 8:26 AM