Many Mormons are not aware that the "Ten Commandments" are never actually called the “Ten Commandments,” but rather, eseret ha-devarim or the "Ten Words” (Exodus 34:28). They are ten unique divine utterances that function in a very special way in the scriptures.  In our Western tradition, we have been taught to view them as a series of prohibitions that carry with it strict penalties if disobeyed.  We have been taught to see them as mundane or "lesser" in comparison to other teachings from the New Testament or Book of Mormon by viewing them as a series of  do's and don'ts applicable to a fallen/temporal world.  Yet, there is a mystery contained in these utterances that comprise a spiral staircase of progression into the presence of God- a ladder of spiritual ascension into oneness with God. 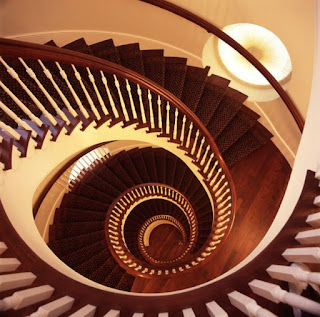 THE HISTORICAL IMPORTANCE AND FUNCTION OF THE TEN


First, the Ten Words were  given in the direct hearing of the people (Exodus 20:18-21).  Unlike the traditions that we have received that they somehow comprise a "lesser law" given because of the transgressions of Israel, the Ten Words were delivered by the voice of God to the entire assembly of Israel before they plead with Moses not to let God speak to them or the episode of the Golden Calf. The experience was so terrifying that it has been said in some literature that the rocks split in two, pregnant animals immediately gave birth, and the people were so overwhelmed that they never want to experience it again.

Second, of all revelations received by Moses from God, only these Ten Words were written by the finger of God. In fact, these utterances were so important in the founding and the establishment of the House of Israel, they were recorded in every testament including the Book of Mormon. (Mosiah 12-13)

Third, the Ten Words are unique in that they in particular are often referred to as “the covenant” (Exodus 34:28). This is why they were placed among the items inside the “aron ha-berit,” the Ark of the Covenant, the Mercy Seat, or Throne of the Most High.

As recorded in the scriptures there was  more given at Mount Sinai than just the Ten Words, but the function of the Ten Words was to establish and bring to remembrance the entire covenant in the minds of the people. These Ten Words capture the essence of God's covenant with Israel, while the rest of instructions given to Israel elaborates on their function and application among the people similar to our modern case law. In the mind of an Israelite, the Ten Words represent the whole Sinai covenant in a manner similar to how we refer to the Constitution or Bill of Rights representing the governing body of law for the United States of America.

The Ten Words function as the foundation of God's covenant. In a literal sense they function as the legal framework that establishes Israel as a nation and the national boundaries they are not to exceed. The Ten Words like the rest of the Torah are filled with principles of morality, but they also establish the basis of God’s relationship with ancient Israel.   This relationship was based first on deliverance as in God delivering Israel out of bondage as expressed in the first utterance “I am the Lord your God, who brought you out of the land of Egypt, out of the house of slavery...” (Exodus 20:2). Israel's covenant relationship was based on an act of deliverance through the taking of the first born of Egypt in the Passover. This is important because Israel’s salvation was established by God first before he gave them further directions to live by.

Honoring God by keeping his instructions under God's Covenant is similar in that it too is a response to God’s salvation. Many have adopted the Ten Words as just a moral code. Others have rejected most, if not all of God's commandments as being relevant today. But what we are being called to is a relationship of transformation.  Instead of God's commands being written on tablets of stone they are now to be engraved upon our hearts. (Jeremiah 31:31-34; 2 Corinthians 3:3). The spiritual ladder of the Ten Words is pathway of transformation and progression into the presence of God brought about by the death and resurrection of Jesus Christ. 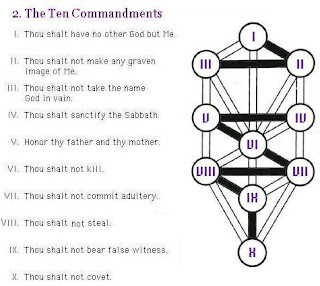 Because of our traditions and our Greek/Western mindset we are often accustomed to reading the 10 utterances by God in a linear/descending fashion.  We start with Commandment  #1 and then read down the list of what we think are a list of do's and don'ts until we reach Commandment #10.  This type of carnal reading of the 10 Commandments/Utterances is correct, but in an of itself it does not reveal the multi-dimensional revelations that the utterances contain. Let us start at the bottom:

"When you climb up a ladder, you must begin at the bottom and ascend step by step, until you arrive at the top; and so it is with the principles of the Gospel– you must begin with the first, and go on until you learn all the principles of exaltation. But it will be a great while after you have passed through the veil before you will have learned them. It will be a great work to learn our salvation and exaltation even beyond the grave.” Joseph Smith, History of the Church, 6:306-307

THE TREE OF LIFE GIVEN TO ISRAEL:

THE FIRST LESSON- THE FIRST RUNG OF THE LADDER


The first lesson of Holiness and Discipleship to be embraced in our journey from the world here below back into the presence of God is the Lesson Regarding Covetousness. In the Israelite mind covetousness has to do with lusting, possessing, and controlling another person or thing.  It is the opposite of tzedekah (charity).  In fact if we were to paint an Israelite picture of covetousness it might read something like this:

"And covetousness embraces power and is unmerciful, and its face is lust, and is prideful, seeks  his own self interest, is  easily provoked, meditates on evil, and rejoices in lawlessness and in lies, is unwilling to bear the burden of anyone or anything, looks only to themselves, has no expectation of God's promises or judgments, and endures nothing to satisfy the self." (Moroni 7:45- The Adulterated Version).

True Covetousness is the Epitome of Unrighteous Dominion:


"That the rights of the priesthood are inseparably connected with the powers of heaven, and that the powers of heaven cannot be controlled nor handled only upon the principles of righteousness.That they may be conferred upon us, it is true; but when we undertake to cover our sins, or to gratify our pride, our vain ambition, or to exercise control or dominion or compulsion upon the souls of the children of men, in any degree of unrighteousness, behold, the heavens withdraw themselves; the Spirit of the Lord is grieved; and when it is withdrawn, Amen to the priesthood or the authority of that man." (D&C: 121:36-37)

Putting off the desire to control, subjugate, or possess another person or thing is the first step as we leave the world we have been born into and then commence our journey into the wilderness like Nephi and Lehi leaving Jerusalem to travel to the Land of Promise and the presence of God. In letting go, we open the doors to higher spiritual experiences as we journey in the more fertile parts of the wilderness.  These disciples understand that the path of Godliness and the power of God is only manifest "by persuasion, by long-suffering, by gentleness and meekness, and by love unfeigned; by kindness, and pure knowledge, which shall greatly enlarge the soul without hypocrisy, and without guile—Reproving betimes with sharpness, when moved upon by the Holy Ghost; and then showing forth afterwards an increase of love toward him whom thou hast reproved, lest he esteem thee to be his enemy; That he may know that thy faithfulness is stronger than the cords of death." (D&C 121:41-44)