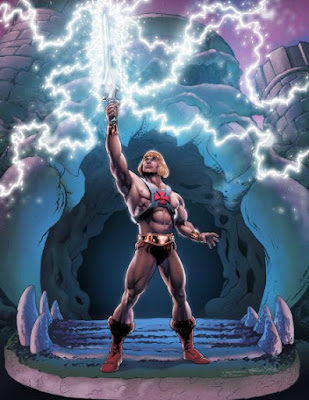 Over the last 30 years I have had the opportunity to meet many self declared Masters Of The Universe-aka. Noble and Great Ones, Ones Mighty and Strong, Davidic Servants, Reincarnated Dead Prophets, Holders of the Keys, etc. etc. They come in many shapes and sizes and while they proclaim their "Chosen Status", "Prophetic Calling", and "Dispensational Kingship" they unfortunately fail to produce any of the works that God proclaims should follow those who are true disciples of Christ (Messiah).  They have words mind you-- OH DO THEY HAVE WORDS! (Some of whom declare their prophetic significance and roles by the number of Books they Produce or overall word count.) Unfortunately, at the end of the day, the sum total of their Great and Marvelous Work is a stack of dusty books and papers in a used bookstore--their dead words that fall to the ground unfulfilled.  Rather than a GREAT AND MARVELOUS WORK it turns out to be SMALL AND UNDERWHELMING. (AKA. GOD'S SMALL AND PATHETIC WORK).

The disciples and fan club of these "great and mighty men" will testify with great conviction regarding their particular prophets calling and importance, but so many live out their lives in quiet desperation waiting for something -anything in fact- that their particular brand of prophet pronounces to be fulfilled. They form groups, fellowships, and movements with their own brand of self proclaimed priestcraft (committees, councils, and quorums) all of which are designed to shore up the words of their leader and their self-important egos- each waiting for their chance in the lime light or their moment in the sun to be seen as THE important authority.

The names and places of these prophets and their groupies may change, but as human nature doesn't change, the story basically remains the same- unfulfilled promises, dashed hopes, victims of abuse, and destroyed lives. BUT WAIT THERE'S MORE!  And by the way, the reason everything went wrong and didn't happen is because IT'S ALL YOUR FAULT! YOU WEREN'T FAITHFUL ENOUGH! YOU WEREN'T GOOD ENOUGH!  THE PEOPLE (not the leader) ARE TO BLAME! And the cycles of spiritual abuse go on and on and on and on.


"Beware of false prophets, which come to you in sheep's clothing, but inwardly they are ravening wolves.Ye shall know them by their fruits. Do men gather grapes of thorns, or figs of thistles?

Every tree that bringeth not forth good fruit is hewn down, and cast into the fire. Wherefore by their fruits ye shall know them." (Matthew 7:15-20)


The idea here being communicated by the Messiah is one that goes back to an ancient teaching of "THE SEED" as preserved by the House of Israel:

Every seed produces after its kind.  An apple seed brings forth an apple.  A fig seed produces a fig tree which produces figs.  A monkey produces a monkey.  A human produces and a human baby.  A False Prophet produces other false prophets.

THE WORD IS THE SEED


In relation to the principle of THE SEED and false prophets we must understand that False Prophets plant their seeds.  What is their seed?  In Israelite thought- THEIR TEACHINGS OR WORDS ARE THE SEEDS.  As we take in the words of God or the words of men these seeds being to take root in our hearts (thoughts) and as we nourish them they begin to grow. The Messiah in what is called the Parable of the Seed demonstrates this ancient principle:

The Prophet Alma in the Book of Mormon reiterates this ancient principle:

"Now, we will compare the word unto a seed. Now, if ye give place, that a seed may be planted in your heart, behold, if it be a true seed, or a good seed, if ye do not cast it out by your unbelief, that ye will resist the Spirit of the Lord, behold, it will begin to swell within your breasts; and when you feel these swelling motions, ye will begin to say within yourselves—It must needs be that this is a good seed, or that the word is good, for it beginneth to enlarge my soul; yea, it beginneth to enlighten my understanding, yea, it beginneth to be delicious to me." (Alma 32:28)

God's seed is considered "the good seed".  In Israelite thought, that which is "GOOD" leads us to fulfill God's commandments.  We must be careful though because even as the word of God is a seed the words of The Adversary or even those words that come from the Hearts of Men are also seeds.  From whatever source, having ingested the seed, we then proceed to produce the fruits or works that the seeds are meant to produce.  This is why the accounts of false prophets/anti-christs in the scriptures are given- as in the case of Korihor:

"And Korihor put forth his hand and wrote, saying: I know that I am dumb, for I cannot speak; and I know that nothing save it were the power of God could bring this upon me; yea, and I always knew that there was a God.

But behold, the devil hath deceived me; for he appeared unto me in the form of an angel, and said unto me: Go and reclaim this people, for they have all gone astray after an unknown God. And he said unto me: There is no God; yea, and he taught me that which I should say. And I have taught his words; and I taught them because they were pleasing unto the carnal mind; and I taught them, even until I had much success, insomuch that I verily believed that they were true; and for this cause I withstood the truth, even until I have brought this great curse upon me...

And it came to pass that as he went forth among the people, yea, among a people who had separated themselves from the Nephites and called themselves Zoramites, being led by a man whose name was Zoram—and as he went forth amongst them, behold, he was run upon and trodden down, even until he was dead. And thus we see the end of him who perverteth the ways of the Lord; and thus we see that the devil will not support his children at the last day, but doth speedily drag them down to hell." (Alma 30: 52-53, 59-60)


WE ARE IN NO LESS PERIL

The Apostle Matthew relates the following warning, "For there shall arise false Christs, and false prophets, and shall shew great signs and wonders; insomuch that, if it were possible, they shall deceive the very elect" (Mat. 24:24)

If it were possible even the very elect would be deceived.  In Israelite thought an elect person or set apart person was set apart because of the terms of God's covenant.  The Prophet Joseph Smith in his commentary on Matthew's writings made the following additions:

For in those days there shall also arise false Christs, and false prophets, and shall show great signs and wonders, insomuch, that, if possible, they shall deceive the very elect, who are the elect according to the covenant." (JST Matthew 1:20-22)

The Messiah himself answers the question:

"For I am YHVH, I change not; therefore ye sons of Jacob are not consumed. Even from the days of your fathers ye are gone away from mine ordinances, and have not kept them. Return unto me, and I will return unto you, saith the YHVH of hosts (Heaven's Armies). But ye said, Wherein shall we return?" (Mal: 3:6-7 or 3 Nephi 24:6-7)

A True Prophet, One Mighty and Strong, Davidic Servant, etc etc sent from God will follow in the footsteps of the Messiah and properly interpret and establish the Torah.  We can only detect the true messengers of God according to the terms of the Covenant.  A false messenger will lead his followers away from the Messiah and his Torah.

Beware the wolves in sheep's clothing: 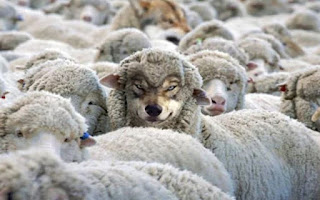 Posted by Mormon Yeshiva at 3:06 PM