ACTUALLY NOT SO STRANGE AFTER ALL 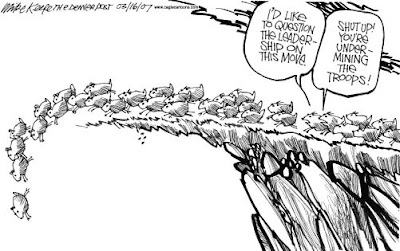 "In the center of the movement, as the motor that swings it into motion, sits the leader. He is separated from the elite formation by an inner circle of the initiated a spread around him an aura of impenetrable mystery which corresponds to his "intangible preponderance."
(Hannah Arendt, The Origins of Totalitarianism)


There are many false shepherds who come among the people declaring that they have been called of God to be the New Messiah, The New David, The New Holder of the Keys, The New Dispensation Head, etc. etc. They make many profound and sometimes wild claims regarding their particular brand of prophetic calling and when anyone questions them they are usually met with scorn, derision, accusations of faithlessness, and a number of self appointed mind guards ready to pounce.  At their disposal is usually their greatest weapons like "The Shunning" or "The Group's Gossip Machine" that goes about attempting to belittle those who question and to destroy their reputations.

Often when their leaders or followers are questioned, they usually cite something like, "Well the reason you don't recognize it is because it is the Lord's Strange Work" or "The Lord's Strange Act".  And I will admit they are correct on one major account--IT IS STRANGE.  In fact so strange, they they and their followers usually disregard God's word, his commandments, and his teachings all the while introducing twisted teachings and doctrines to gain more followers by stroking their egos and making them feel like they are among "The Lord's Chosen" or elite band of followers. I mean, "Hey, who doesn't like to to have their ego stroked?"  Most of us natural or carnal men and women do.


WHAT IS THE 'STRANGE ACT'


The idea of the Lord's "strange act" comes from the words of Isaiah:

"For the LORD shall rise up as in mount Perazim, he shall be wroth as in the valley of Gibeon, that he may do his work, his strange work; and bring to pass his act, his strange act." (Isaiah 28:21)

This chapter in Isaiah commences with YHVH condemning the political leaders of Ephraim and the norther Kingdom of Israel whose capital was Samaria.  At the time the political and religious establishment of the Northern Kingdom had become so idolatrous and so corrupt, God presented his covenant lawsuit against her, and rendered his covenant judgment upon her.

The word for "strange" here is the Hebrew word zoor which can mean strange or used in reference to someone who is a foreigner, that which is profane, and and to a person or nation who has committed adultery/idolatry.  In this case the Lord's "Strange Act" has to do with the cutting off of the Northern Political and religious leaders from their covenant status and covenant land grant. He then introduces Israelite allegorical and metaphorical symbolism regarding a farmer who plows, threshes, and then preserves what fruits he can.  His "strange act" being a prophetic allusion to the cutting off of an unfaithful nation.

This same phrase is used in similar context by Joseph Smith in D&C 101 in regard to the cutting off of the Wicked:

Pray ye, therefore, that their ears may be opened unto your cries, that I may be merciful unto them, that these things may not come upon them. What I have said unto you must needs be, that all men may be left without excuse; That wise men and rulers may hear and know that which they have never considered; That I may proceed to bring to pass my act, my strange act, and perform my work, my strange work, that men may discern between the righteous and the wicked, saith your God.  (D&C 101:85-95)

Both Isaiah and Joseph Smith draw upon the same imagery to communicate that the Strange Act has to do with the cutting off of the political and religious leaders who are in covenant rebellion to him and who seek to oppress those who uphold the terms of his covenant.  It has nothing to do with teaching "strange", foreign, or unrecognizable doctrines and ordinances invented by false prophets who seek to reshape the gospel and their followers into their unique version of the golden calf.

These false prophets seek to declare a gospel from their own imaginations and the false and delusive spirits they listen to.  They twist the commandments and do not teach their followers God's commandments.  You will however hear something similar to the following "permissive" commandments:

"I can't say or do anything regarding sexual misconduct, pedophilia, rape, theft, ritualistic sex abuse, etc etc,  the lord gives the people enough rope to hang themselves."

"I can't say or do anything regarding sexual misconduct, pedophilia, rape, theft, ritualistic sex abuse, etc etc, the people have to rise and fall on their own."

"Those old things/commandments are done away and don't apply to us, we live a higher law."

"You can't hold us up to this (i.e. as he holds up the scriptures), these are lesser, we live by the higher law of revelation."

"The Kingdom of God is a theocracy.  We the council,leader, prophet, holder of the keys, tells the people what to do.  And you don't want to make us enforce it."

which pretty much can be summed up in one simple doctrine:

This is why Isaiah warned the Kingdoms of Israel earlier regarding these false prophets:

"To the law and to the testimony: if they speak not according to this word, it is because there is no light in them."  (Isaiah 8:20)

Why the Book of Mormon warns us:

People often ask, "Why would anyone do such a thing?"  Is it Money? Sex? Power?  What?  To which the answer would be yes to all, but often times their desires can be distilled down feeding their egos and to gaining control all the while deluding themselves into thinking they are doing the work of God.

THE WORKS OF THE MESSIAH WERE NOT "STRANGE":


The work of the Messiah commenced with a small nucleus of followers, but grew into a massive following of thousands of Jews.  Word of his works and his words not only spread throughout the land but extended even beyond the borders. Many believed him and believed in him.  At the same time, jealousy of him and the potential threat to the Jewish religious and political bodies that existed at the time made him worthy of notice.  In fact, so noteworthy that he was required to attend the Feasts of Israel in anonymity so as not to draw their attention.  While there were those who saw him as a troublemaker, there were many more who saw him as a Messiah, The Son of David, even the King of Israel.

While there are those who believe that he made little effort to be understood by the religious bodies of his day, this teaching would be erroneous.  To his Jewish listeners his words and his works struck to the very center of Jewish religious observance, piety, and political expediency.  His parables were drawn from similar parables and teachings of his day.  His words cut to the heart of the various sects of Judaism in his day.  His teachings were consistent with the Torah and the Prophets and make no mistake they were all distinctly Jewish in content, nature, and tone.

His parable of the seeds which drew upon even more ancient teachings preserved by the House of Israel and their Mystery Schools is just one example.  It had nothing to do with him declaring his status as Messiah but much more to do with Ruach Elohym, the manner of the true disciple, and the ascent of his people. These doctrines of such a nature that they were communicated in a manner to both reveal and conceal, but never to alter the commandments of God or to give him an excuse to set them aside for expediency.

The true fruits of many false prophets lay in the synchronization of the holy with the profane.  They wink and nod at the commandments of God and quote scriptures when it suits their fancy or they need them to manipulate the people into doing what they want, but in the end the fruits of the Gospel of Jesus Christ are absent, their revelations fall to the ground unfulfilled, and their people are left wondering in a state of confusion usually asking something like, "What the hell is going on?"

BEHOLD THE DOCTRINE OF ELITISM, THE TRUSTED FEW, THE HEARTS CORE WITHIN A HEARTS CORE, THE FAITHFUL REMNANT, ETC. ETC. ETC.


To answer the questions of the people or to again stroke their ego, the people are flattered that those who remain faithful to the leader and his movement are among the trusted or faithful few who really "get it". They transform the Great and Marvelous Work of God in which it was declared:

"Behold, the days come, saith the LORD, that I will raise unto David a righteous Branch, and a King shall reign and prosper, and shall execute judgment and justice in the earth. In his days Judah shall be saved, and Israel shall dwell safely: and this is his name whereby he shall be called, THE LORD OUR RIGHTEOUSNESS.

Therefore, behold, the days come, saith the LORD, that they shall no more say, The LORD liveth, which brought up the children of Israel out of the land of Egypt;

But, The LORD liveth, which brought up and which led the seed of the house of Israel out of the north country, and from all countries whither I had driven them; and they shall dwell in their own land." (Jeremiah 23:5-8)

INTO the SMALL AND PATHETIC WORK OF MAN wherein the "trusted few" who do continue to follow their delusional prophet somewhere out into the middle of nowhere where they establish their Zion/New Jerusalem/ Temple etc etc which is comprised of unfinished homes, tents, and mobile homes, arranged in chaotic mess where they and their people continue to "Do Whatever They Wilt" all the while destroying the lives of their families, their friends, and their children's children's children even to the fourth and fifth generation.

Unto such I can only say that I personally testify to you as a first hand witness that the words of YHVH are true wherein he declares;

"My heart is broken because of the false prophets,
and my bones tremble.
I stagger like a drunkard,
like someone overcome by wine,
because of the holy words
the LORD has spoken against them.

For the land is full of adultery,
and it lies under a curse.
The land itself is in mourning—
its wilderness pastures are dried up.
For they all do evil
and abuse what power they have.

“Even the priests and prophets
are ungodly, wicked men.
I have seen their despicable acts
right here in my own Temple,”
says the LORD.

“Therefore, the paths they take
will become slippery.
They will be chased through the dark,
and there they will fall.
For I will bring disaster upon them
at the time fixed for their punishment.
I, the LORD, have spoken!." (Jeremiah 23:9-12)


Note:  For those who email me questioning whether I am referring to their particular prophet, David, group, movement, or church I can only say that when I wrote this I had no ONE particularly in mind as there are so many.  But what I can tell you is that if it looks like a duck, has feathers, and walks like a duck--it might be a duck. Oh and remember.....there is a test, a Test, a TEST coming!" 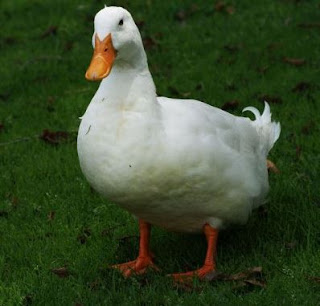 Posted by Mormon Yeshiva at 1:07 PM