WHAT DOES IT MEAN TO STEADY THE ARK? 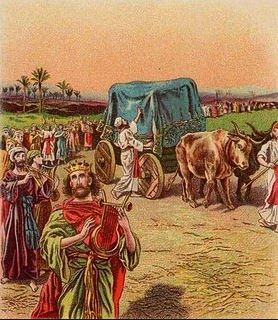 The cry of “Steadying the Ark” is a  phrase that is often used by people and religious leaders alike to silence people who ask questions or suggest, “ALL IS NOT WELL IN ZION.” In doing do they cite the episode involving King David and a man by the name of Uzzah that occurred when King David set his hand to move the Ark of the Covenant from its temporary resting place to Jerusalem.

It is normal for those involved in group or community dynamics to want to maintain a state of equilibrium--i.e. the status quo.  Like the voice of an innocent child who vocalizes clearly what others know to be true but are often too afraid to say anything, sometimes, the emperor really does have no clothes on. But, what if I told you though that the ark was meant to be steadied? What if I told you that Uzzah was the victim of a Priesthood lax in the adherence to God’s commandments?

In 2 Samuel 6, we read the account of a man named Uzzah, and the inappropriate handling of the Ark of the Covenant:

"David again gathered all the chosen men of Israel, thirty thousand. 2 And David arose and went with all the people who were with him from Baale-judah to bring up from there the ark of God, which is called by the name of the Lord of hosts who sits enthroned on the cherubim. 3 And they carried the ark of God on a new cart and brought it out of the house of Abinadab, which was on the hill. And Uzzah and Ahio, the sons of Abinadab, were driving the new cart, 4 with the ark of God, and Ahio went before the ark. 5 And David and all the house of Israel were making merry before the Lord, with songs and lyres and harps and tambourines and castanets and cymbals.

The Ark of the Covenant can and should be steadied in the way God had outlined to the Levites. They were to carry the Ark on their shoulders as is specified in Exodus 25:12-15 and Numbers 7:9. It was never to be placed in a cart pulled by oxen. Instead of the priesthood upholding God’s law and enacting his instructions they treated that which is most holy as common and profane. The story is a description and warning not to Uzzah who was an innocent and well intentioned bystander, but to the Leaders and the Priesthood of God’s people. To an Israelite the message is clear, the laws and ordinances of God can never be altered or changed by the position of the king (Leaders in Zion) or the Priesthood (those who were charged to steady the ark according the law and pattern God had set). In truth Uzzah was a victim of a King (even King David) who did not know the law in this instance and a priesthood that should have known to uphold and adhere strictly to God’s commandments. Ignorance is no excuse for mishandling such things, and is in fact inexcusable under God’s law.

When the ox stumbled Uzzah instinctively reached out to steady the Ark and was struck down. While we may consider this severe, the problem was not simply that he had touched the Ark. The problem was that the Priesthood charged with the care and handling of holy things had grown sloppy and lax. Three months later after consulting other priests, inquiring of the Lord, and consulting the scriptures King David finally figured out that this incident occurred because the Ark had not been steadied according to the commandments of God.

This story was committed to Israel as a warning that God’s commandments and ordinances cannot be changed or abrogated by anyone’s “good intentions” whether it be king, priest, or lay member. The principle of covenant being communicated is a message that had the leaders and the priesthood steaded the Ark of the Covenant according to the commandments and instructions of God, disaster would have been averted.

This story has nothing to do with not questioning leaders or informing leaders about disobedience and failure to adhere to God’s commandments. In fact it is really just the opposite, it is a charge to all of us to study and know God’s commandments and ordinances so that when leaders and Priesthood fail to uphold and follow God’s word that we stand up and inform them and the people of Gods commandments and statutes so that other disaster may be averted.  While it is still the leaders' and the priesthood's responsibility to carry out God's instructions in exactness, it is also our responsibility to know what God's commandments say and to speak up when those instructions may not be considered or are being clearly disregarded.
Posted by Mormon Yeshiva at 7:21 AM No comments: