"I have set the Lord always before me: because he is at my right hand, I shall not be moved."
Psalm 16:8

There are many forces in the world that seek to portray Joseph Smith and the restoration as a product of sorcery, delusion, and folk magic.  Once such often debated matter is an item that was allegedly among the property of Joseph Smith called "The Jupiter Talisman".  The existence and ownership of the item has been a subject of hot debate in both Mormon and Anti-Mormon circles.  In fact it is often used by some to portray Joseph Smith as magician and follower of the dark arts.  The two circles seemingly go round and round never actually coming to any real substantive conclusion as to whether this item supports Joseph Smith as Prophet or Joseph Smith as a wanna be Lord Voldemort.

The item itself, however, is not without precedent in Israel.  There is a practice passed down through various traditions in Judaism that was attributed to find it's source in the ancient Schools of the Prophets.  One such practice was a discipline of training the mind to be attentive to Living Presence of God. Part of this discipline was the surrounding of a person, family, synagogue etc. with holiness and by doing so one aligned one's spirit with the mind of God-the Ruach Elohiym or what Mormon's refer to as The Holy Ghost.

The idea of walking in cleanliness amid the filth of this world was a distinctly Israelite concept-perhaps modernly restated as "Being In The World, But Not Of The World".  This idea of cleanliness in practice in Israel was the cleansing of one's home as well as cleansing one's mind.  Included in this tradition was the using of a simple piece of art known as a Shiviti: 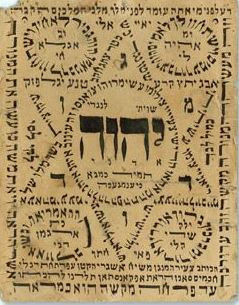 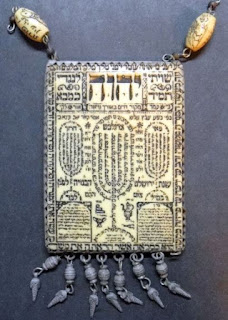 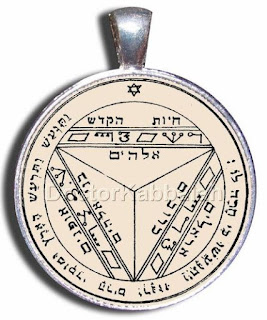 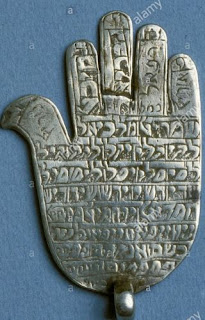 As a work of art, the Shiviti can often be found to this day being carried by many orthodox and conservative Jews of varying traditions. As art, many sacred parchments, scrolls, prints, and tapestries are still found adorning many homes and synagogues.  Its usage is a literal carrying out of Psalm 16:18, ""I have set the Lord always before me: because he is at my right hand, I shall not be moved."
The idea is that because the name of God is Holy it brings holiness into the place where the name resides whether it be the home, the synagogue, or the heart.

The purpose of the Shiviti was as a tool of prayer and remembrance, serving to assist a person in practicing the presence of God and to remember his commandments. They come in varying forms and are often labeled as amulets and talismans etc., but they are far from "magical" or "mystical."  Their original purpose was an item of prayer and meditation to focus the heart and mind on God, his holiness, and his presence.  Over the centuries, many esoteric groups such as Freemasonry, Rosicrucianism, and varying practices of folk magic latched onto these practices.  Some groups interpreted the practice in its proper light as forms of artwork and tools for prayer and meditation, while others embraced the practice to obtain power from God or power over forces and entities in the spiritual realm.  Whatever their usage evolved into, the original purpose of the Shiviti was to fulfill the word of God that His name and presence is always before us.

Through the middle ages and even into this century there are those who accuse many Jews of practicing "the dark arts" because of such items.  This is also understandable in that over the centuries, there have been those who portrayed and sold this, and other similar items, as a form of magical item that brings power and prosperity.  Over time they became associated with witchcraft and folk magic by many outside Judaism.  The item itself became equated with power and miraculous gifts rather than the person's mindfulness and faithfulness to God and his covenants. What was intended as an item to remind and focus the mind and heart on God and his holiness, soon came to be seen as an item of the magical world.

It was reported that an item which came to be identified as a "Jupiter Talisman" was found among the possessions of Joseph Smith.  Over the years there have been many Mormon and Anti-Mormon sources alike that attempt to explain the purpose of the item.  From those articles written, the conclusions regarding this "talisman" vary from attempting to explain the symbolism and purpose to articles that condemn Joseph Smith as a practitioner of the dark arts.  That he owned the item appears to be relatively substantiated.  The intent of his having the item, however, has not been fully explored.  Many attempt to equate his possession of the object with magic and sorcery, just as many attempt to ascribe the usage of the Shivitis to a form of magic or an object of the dark arts.  There appear to be no substantive documents from Joseph Smith documenting his reasons for owning or using the item.

That being said. Ever present in the speeches and prayers of Joseph Smith was the restoration of the House of Israel. An example of this can be demonstrated in his prayer, "I ask God in the name of Jesus, to . . . cause that His word may speedily go forth to the nations of the earth, to the accomplishing of His great work in bringing about the restoration of the House of Israel." History of the Church, 1:451. In addition, he also received the company and instruction of Jews such as Professor Joshua Seixas who was hired by Joseph Smith and his associates to teach them Hebrew.  As such, it could also be just as likely that the object was used as an item of prayer, meditation, and holiness patterned after the ancient Shivitis.

We may never know Joseph Smith's intent with this object. Whatever the source of the object is, whether it be Masonry, Judaism, or Folk Magic, the item itself is not without precedence in Israel and many practises preserved in Judaism to this day.  While many assign the article to the world of satanism, magic, and sorcery, these same people also assign many of the practices in Judaism that they do not culturally understand to the same categories. So before grabbing our pitchforks and lighting our torches as we scream, "BURN THE WITCH" perhaps it is also prudent to consider that his ownership of the item may have served the same purpose of the Shiviti or may find its roots in that tradition.

Often times there are those who place a label of evil, occult, sorcery, or witchcraft on things they do not understand.  They bring up arguments regarding the usage of seer stones and other items while neglecting the presence and usage of items such as the Urim and Thummim, The Ephod, Aaron's budding rod, etc., found within the scriptures. These items were used in association with revelation, instruction, and power displayed before all Israel.  Would these same naysayers also condemn the prophets and people who wrote their Bible for having and using many of these same items?

"And because my words shall hiss forth—many of the Gentiles shall say: A Bible! A Bible! We have got a Bible, and there cannot be any more Bible.

But thus saith the Lord God: O fools, they shall have a Bible; and it shall proceed forth from the Jews, mine ancient covenant people. And what thank they the Jews for the Bible which they receive from them? Yea, what do the Gentiles mean? Do they remember the travails, and the labors, and the pains of the Jews, and their diligence unto me, in bringing forth salvation unto the Gentiles?

O ye Gentiles, have ye remembered the Jews, mine ancient covenant people? Nay; but ye have cursed them, and have hated them, and have not sought to recover them. But behold, I will return all these things upon your own heads; for I the Lord have not forgotten my people.


All rights reserved. No portion of this article may be reproduced in any form without permission from the publisher, except as permitted by U.S. copyright law.


Posted by Mormon Yeshiva at 10:15 AM No comments: