Ascending To The Mystery Of The Son 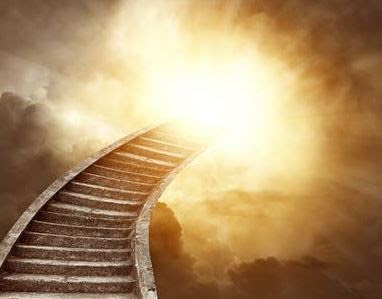 “And it came to pass that I, Nephi, spake unto them, saying: Do ye believe that our fathers, who were the children of Israel, would have been led away out of the hands of the Egyptians if they had not hearkened unto the words of the Lord?
Yea, do ye suppose that they would have been led out of bondage, if the Lord had not commanded Moses that he should lead them out of bondage?
Now ye know that the children of Israel were in bondage; and ye know that they were laden with tasks, which were grievous to be borne; wherefore, ye know that it must needs be a good thing for them, that they should be brought out of bondage.” (1 Nephi 17: 23-25)

“Then spake Jesus to the multitude, and to his disciples, saying, The scribes and the Pharisees sit in Moses’ seat: All therefore whatsoever they bid you observe, that observe and do; but do not ye after their works: for they say, and do not. For they bind heavy burdens and grievous to be borne, and lay them on men’s shoulders; but they themselves will not move them with one of their fingers.” (Matthew 23-1-4)

The Greek version of Matthew obscures the frame of reference of something that is plain and simple to the mind of an Israelite.  According to a Hebrew text of Matthew preserved by the Baal Shem Tov, “Now all which they say to you keep and do; but according to their ordinances (takanot) and deeds (maasim) do not do because they say and do not.” (Matthew 23:3;  Hebrew Gospel of Matthew, George Howard)

The natural man/woman views God through his or her own natural eyes. It sees God as a great power who has an end game.  In the mind of the natural man, God demands through performances and ordinances that we do what he desires.  To the natural man, if we do what God desires in form only, in our outward performances, and keep the commandments then we will receive the reward.  Notice how Laman and Lemuel complain along this very sentiment, “we know that the people who were in the land of Jerusalem were a righteous people; for they kept the statutes and judgments of the Lord, and all his commandments, according to the law of Moses; wherefore, we know that they are a righteous people”.

The natural man is a force of division and seeks to obtain through performance so that it may receive to covet. Its desires remain rough, unrefined, with no real boundaries except the outward boundaries of legal performance that it seeks to manipulate to obtain the things of this world. The natural man cannot comprehend the things of the spirit, the instructions of God, or the great and marvelous works of God—even the building of ship to cross the great deep to reach the mystery of the throne of God or the Land of Promise. 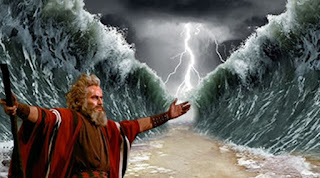 “Now ye know that Moses was commanded of the Lord to do that great work; and ye know that by his word the waters of the Red Sea were divided hither and thither, and they passed through on dry ground. But ye know that the Egyptians were drowned in the Red Sea, who were the armies of Pharaoh.” (1 Nephi 17:26-27)

Besides the literal account of the Red Sea dividing, this miraculous event also teaches the inner reality of man and his ascension in connecting with God.  Nephi cites the parting of the red sea and the deliverance from the armies of Pharoah not only to draw the minds of his brothers to faith and trust in the God of Israel, but also to teach us that submission and obedience to God is the way of to ascend the center pillar or pathway to God. The dividing of the waters “hither and thither” represent the right and left hand pillars of the tree of life.  The dry ground represents the center pillar, pillar of balance or mildness, or the pathway in a strait and narrow course back into the presence of God.  Moses and the children of Israel represent the spiritual children of God who can ascend up the center pillar into the presence of God.  The Pharaoh and his armies represent those natural, carnal, or egotistical people who attempt to ascend only to drown in the great deep or waters of the Red Sea.  The sea or deep symbolizes the waters of power (Gevurah) that only part for those whose desires are purified-those who are ready to separate themselves from the natural man who is self-interested, self-willed, and lawless.  The miracle of separation only occurs through faith (trusting-loyalty) to God as we are ready to go beyond the reason of our five senses.

“And ye also know that they were fed with manna in the wilderness. Yea, and ye also know that Moses, by his word according to the power of God which was in him, smote the rock, and there came forth water, that the children of Israel might quench their thirst. And notwithstanding they being led, the Lord their God, their Redeemer, going before them, leading them by day and giving light unto them by night, and doing all things for them which were expedient for man to receive, they hardened their hearts and blinded their minds, and reviled against Moses and against the true and living God.” (1 Nephi 17:28-30)

As the children of Israel were corrected in the wilderness they were fed manna (mahn). Manna or the bread of heaven and symbolized our desire for oneness with God in love and receiving to bestow.  Manna represents the connection of Binah (Understanding) with the earthly (Malkhut) wherein our desires become purified to reflect the Love of God and Love for our fellow man-receiving to bestow.  Moses speaking to the rock by his word to bring forth water is a symbol for the means by which the life, desire to bestow, and the mercy of God comes forth.

Nephi’s evokes the image of God leading them by a cloud by day and a pillar of fire by night demonstrates the manner in which ascension occurs.  Some things being concealed (the cloud) while other things being revealed (the pillar of fire).  The outcome of God’s actions (both things concealed and things revealed) leading those in the wilderness to the Land of Promise or Throne of God that exists beyond the barrier or veil.  In their journey toward the Land of Promise God reveals that in everything he does his desire is for us to receive.  The desire to receive to covet represents the hard heart even as the blindness of minds represents the inability to exercise faith beyond the reason of the five senses. Moses represents the man who is corrected and connect to the living God.  Their reviling against Moses representing the refusal to correct and their inability to ascend into the presence of God just as Laman and Lemuel's reviling against Nephi and Lehi represent their inability to understand and accept the invitation to ascend the throne of God.

The Children of Israel being “led” by the Lord their God, their Redeemer is paralled with being led according to his Word.  The Word is the Son of God and they were literally led by him and all things from traveling through the wilderness to the promised land were accomplished through the word of God or his Son.  On a deeper level of meaning, this being led by the word represents the correction of the individual represented by coming into oneness with the Mystery of the Son or Zier Anpin as represented by the following: 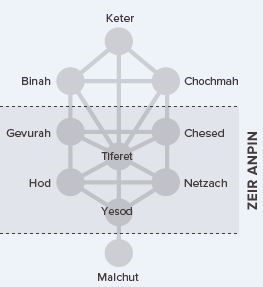 Zeir Anpin or as sometimes called, the Mystery of the Son or the Messiah. Not only does it represent the Messiah but also represents those after his holy order/manner who have corrected themselves to the degree where they have balanced the attributes of justice and mercy, glory and endurance, etc. It represents a relationship and condition of balancing the attributes of God in ourselves. This balancing is represented by oneness with God or a merging of the left pillar and right pillar into the center pillar of mildness or balance. The six sephirot represented by the Son of God represent a fusion of the attributes of God into a new creation.  Like a woman or bride (Nukvah) who receives the seed of a man to bring forth a new child, a man or woman (as earth symbolized by Malkhut) receives the mystery of Son, the seed of the Word, and creates a new entity.  Using the analogy of a kingdom, the people of the kingdom accept the King as sovereign and in return he provides for all their needs.  This fusion of the divine attributes is represented by the star of David which is a symbol not only for the seed of God but the oneness of God: 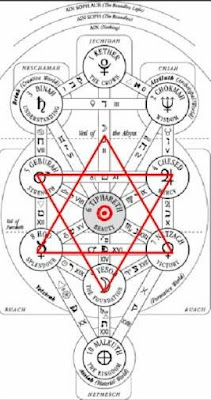 All rights reserved. No portion of this article may be reproduced in any form without permission from the author, except as permitted by U.S. copyright law.
Posted by Mormon Yeshiva at 6:57 AM No comments: