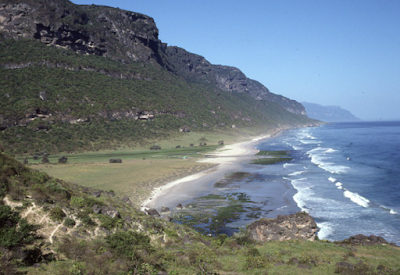 The Book of Mormon contains many hidden mysteries-hidden in plain sight. The word Irreantum is one such mystery.  Since the coming forth of The Book of Mormon there have been many critics who proclaim that this word along with many others are simply creations from the mind of Joseph Smith.  Unfortunately, many of these critics have approached word and the text surrounding it from a Gentile Paradigm.  When examined from the ancient Israelite prophetic tradition, we find a hidden teaching and prophecy.

As I have stated before, it has always been my contention that many of the "strange" names and words we find in the Book of Mormon are actually Hebrew word constructs. At first glance it appears that The Book of Mormon has a problem as the word Irreantum does not mean "many waters" in Hebrew (ravim mayim-בְּמַיִם רַבִּים).  Knowing this many scholars have attempted to search for words in other languages in the surrounding nations of Israel to find support for this strange word, Irreantum without much success.

THE IMPORTANCE OF THE SETTING

To unfold the meaning of the word Irreantum, we first need to examine the setting in which the word is mentioned. In 1 Nephi 17, Nephi and his family were led to the land called Bountiful (because of its much fruit and wild honey- a connection with the themes surrounding Yom Teruah/Rosh Hashana). It was here that Nephi was commanded by the Lord to, "Arise, and get thee into the mountain" (1 Nephi 17:7).  After ascending the mountain, Nephi is then given a vision of The Lord and is shown how to construct the vessel that would take him and his family to The Land of Promise, "Thou shalt construct a ship, after the manner which I shall show thee, that I may carry thy people across these waters." (1 Nephi 17:8)

The usage of the word IRRE -an-tum is meant to draw the Israelite reader to a unique name or title of God/ YHVH.  This title is first mentioned in the account of Abraham who took his son Isaac up a mountain (attributed to being Mount Moriah-the location of the future temple of Solomon) to be sacrificed.  Instead of carrying out the sacrifice God offers his own solution:

"And the angel of the LORD called unto him out of heaven, and said, Abraham, Abraham: and he said, Here am I.

And he said, Lay not thine hand upon the lad, neither do thou any thing unto him: for now I know that thou fearest God, seeing thou hast not withheld thy son, thine only son from me.

And Abraham lifted up his eyes, and looked, and behold behind him a ram caught in a thicket by his horns: and Abraham went and took the ram, and offered him up for a burnt offering in the stead of his son.

And Abraham called the name of that place Jehovahjireh: as it is said to this day, In the mount of the LORD it shall be seen." (Genesis 22:11-14)

Here the the title Jehovahjireh (YHVH Yireh) which actually means, " YHVH shall be seen" or "YHVH shall give a vision" connected to the Hebrew word ra'ah meaning to behold, a seer, and to have a vision.

The remainder of the word an-tum of IRRE-an-tom meaning an- as to eyes  and tom meaning amazed/wholeness/perfect or integrity.

By Nephi Calling the Place Irreantum he is describing the place where he like Abraham ascended a mountain and beheld The Lord in a grand or glorious revelation. It is also in this account with Abraham that we see a type and shadow of the Messiah and his deliverance/atonement.

WHICH BEING INTERPRETED IS MANY WATERS

But wait, doesn't Irreantum mean many waters?  The answer to this is in the word interpreted.  In the Israelite prophetic tradition to interpret something does not carry the same meaning of interpret/interpreted/ or interpretation as in our English vernacular. In the Israelite prophetic to interpret means to make a connection with something in The Torah (The 5 Books of Moses). In this case Nephi is connecting something in his Vision of THE LORD (Irreantum) with the words "MANY WATERS".

This idea interpreted is very foreign to us in our "modern culture", but was a device commonly used in ancient Israel.  In other words, Nephi is using the word Irreantum to connect his readers with a teaching related to the words, "Many Waters".  Now comes the task-where in the Torah do we find this teaching.

MANY WATERS-BALAAM AND THE BLESSING OF ISRAEL:

"He shall pour the water out of his buckets, and his seed shall be in many waters, and his king shall be higher than Agag, and his kingdom shall be exalted." (Numbers 24:7)

In Numbers 22-24 we are introduced to Balaam the Son of Beor.  He was a gentile or Non-Israelite prophet.  In this account Balaam is called upon by Balak the King of Moab to declare curses over the Israelites. In this teaching every time Balaam was called upon to curse Israel he was given prophecy by God to only pronounce blessings upon the House of Israel. The actual account contains three distinct prophecies regarding the House of Israel. This particular prophecy upon the House of Israel wherein we find the connection to "Many Waters" is found in Balaam's Third Prophecy:

"When Balaam saw that it pleased the LORD to bless Israel, he did not go, as at other times, to look for omens, but set his face toward the wilderness.

And Balaam lifted up his eyes and saw Israel camping tribe by tribe. And the Spirit of God came upon him, and he took up his discourse and said,

“The oracle of Balaam the son of Beor,  the oracle of the man whose eye is opened, the oracle of him who hears the words of God, who sees the vision of the Almighty, falling down with his eyes uncovered:

How lovely are your tents, O Jacob, your encampments, O Israel!

Like palm groves that stretch afar, like gardens beside a river, like aloes that the LORD has planted, like cedar trees beside the waters. Water shall flow from his buckets, and his seed shall be in many waters; his king shall be higher than Agag, and his kingdom shall be exalted.

God brings him out of Egypt and is for him like the horns of the wild ox; he shall eat up the nations, his adversaries, and shall break their bones in pieces and pierce them through with his arrows.

He crouched, he lay down like a lion and like a lioness; who will rouse him up?

And Balak’s anger was kindled against Balaam, and he struck his hands together. And Balak said to Balaam, “I called you to curse my enemies, and behold, you have blessed them these three times.

Therefore now flee to your own place. I said, ‘I will certainly honor you,’ but the LORD has held you back from honor.”

And Balaam said to Balak, “Did I not tell your messengers whom you sent to me,

‘If Balak should give me his house full of silver and gold, I would not be able to go beyond the word of the LORD, to do either good or bad of my own will. What the LORD speaks, that will I speak’?

And now, behold, I am going to my people. Come, I will let you know what this people will do to your people in the latter days.” (Numbers 24: 1-14)

This particular prophecy of Balaam has in Israel has been traditionally understood to be related to the various exilic events of Israel with the promise of a future restoration.  It is also a teaching about the turning of cursings into blessings by God.

In returning to Nephi drawing upon this teaching regarding "Many Waters" he is directing his reader to this account in the Torah. It is also very applicable as the family and descendants of Lehi were led away as part of a great exile of Israel from the Land-he being led away prior to the Babylonian Captivity.  Knowing that his readers would have the "record of the Jews" he connects his vision on the mountain in the land of Bountiful with not only that of Abraham, but also this prophetic blessing that is to come regarding the restoration of Israel- of which his people are remnant.

LEADING US TO BALAAM'S 4TH PROPHECY:

God blessed Abraham in the account of the sacrifice of his son Isaac and prophesied thus:

This same blessing was also pronounced by Balaam in his blessing upon Israel. Just as God then provided his substitution for Isaac so also does he prophecy of a Messiah or Star who shall come out of Jacob in Balaam's 4th prophecy:

And he took up his discourse and said, “The oracle of Balaam the son of Beor, the oracle of the man whose eye is opened, the oracle of him who hears the words of God, and knows the knowledge of the Most High, who sees the vision of the Almighty, falling down with his eyes uncovered:

I see him, but not now; I behold him, but not near: a star shall come out of Jacob, and a scepter shall rise out of Israel; it shall crush the forehead of Moab and break down all the sons of Sheth.

And one from Jacob shall exercise dominion and destroy the survivors of cities!”

Then he looked on Amalek and took up his discourse and said, “Amalek was the first among the nations,

but its end is utter destruction.”

And he looked on the Kenite, and took up his discourse and said, “Enduring is your dwelling place,

and your nest is set in the rock. Nevertheless, Kain shall be burned when Asshur takes you away captive.”

And he took up his discourse and said, “Alas, who shall live when God does this?

But ships shall come from Kittim and shall afflict Asshur and Eber; and he too shall come to utter destruction.”

Nephi uses the Hebrew word construct Irreantum to connect his reader to the teaching of Balaam in Numbers 22-24. Like Abraham who experienced a miraculous vision upon the mount of the provision of God in place of Isaac, Nephi also experienced a miraculous vision upon the mount recorded in such a way to couch a hidden prophecy regarding not only an ancient prophecy regarding the exile and restoration of the House of Israel, but also of the coming of The Lord, and the power of God to restore or bless that which once had been set apart for destruction. Having seen the exile of his family and his vision of their rise as a great people and their subsequent destruction, Nephi couches this word Irreantum to show us that although exiles of Israel have been stricken, the beauty of their tents and encampments will yet be restored.  What great blessings await, "MY PEOPLE O' HOUSE OF ISRAEL" on this continent for they will yet be restored again as a covenant body: The Remnant of Jacob, The Jews, The repentant Gentiles, The Ten Tribes, and as many of the House of Israel as shall come!

Isn't it amazing what the "nonsensical" word Irreantum contains.