ENTER THE BROTHERS OF JARED 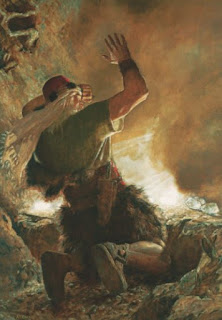 The Brother of Jared serves as a type and shadow of those in the latter days who will serve as proxy saviors or intercessors for small groups of people in the land.  The Brother of Jared calling upon the name of the Lord is a key example of a man appealing to God before his courtroom.  In Genesis 11 God rendered judgment on mankind with the penalty of scattering them and mixing their language.  The King of Heaven looked down upon the earth, saw what was going on, and declared his ruling upon them:

“Come, let us go down and there confuse their language, so that they may not understand one another’s speech. So the LORD dispersed them from there over the face of all the earth, and they left off building the city.” (Genesis 11:7-8)

The language would be mixed and the people would be scattered as a result of God’s ruling.  Similar to obtaining favor with a King by honoring the King and being obedient to his decrees, the Brother of Jared had obtained favor with God.  As such he could approach the Throne of Heaven and Intercede for his people.   The Brother of Jared then cried out (Hebraic thought—made a legal request or proclamation) to God regarding the two judgments God rendered:

1.        The Brother of Jared made a legal request for God to stay his judgment upon him and their relations regarding the confounding of their language:

2.       The Brother of Jared made a legal request for God regarding their scattering:

“And it came to pass that Jared spake again unto his brother, saying: Go and inquire of the Lord whether he will drive us out of the land, and if he will drive us out of the land, cry unto him whither we shall go. And who knoweth but the Lord will carry us forth into a land which is choice above all the earth? And if it so be, let us be faithful unto the Lord, that we may receive it for our inheritance.” (Ether 1:38)

In the Torah the Prophets were agents of God. They were God’s authorized prosecuting attorneys. They brought  covenant lawsuits against nations. They reminded the common people as well as rulers of the covenant that God had made. Then they reminded the listeners of the statutes and judgments of that covenant. They charged people under the terms of that covenant.  Then they warned the nation of the fact that God, the one true king of Israel, would bring His curses against the nation unless they came back to the terms of the covenant (i.e.  such as war,  disease, pestilence, famine and economic ruin).

The prophets called the nation to repentance reminding them of the promised blessings for honoring God and keeping the laws of his Covenant.  If the breach of covenant was healed then deliverance and blessings followed.  If the breach was not repaired then the nation was destroyed and the people were scattered and taken into captivity.

After making his plea before the Judge of Heaven and Earth, the Brother of Jared and his people were taken to a place where they rested for four years.  Judgment had been passed and the sentence carried out.  While their language was not confounded they were still taken away into another land.  The judgments were for national sin not the personal sins of the Brother of Jared or his people.  The judgment having been carried out the next step was complete legal restoration.  Just as the rendering of judgment is a legal process the process of restoration is a legal process.  God does not cast judgment lightly nor does he take restoration lightly.

His process of restoration includes cleaning the people up, teaching them his laws, conditioning them to live his commandments, and finally bringing them back into his presence before his throne.
Posted by Mormon Yeshiva at 8:59 AM