THE BOOK OF MORMON: AND IT CAME TO PASS 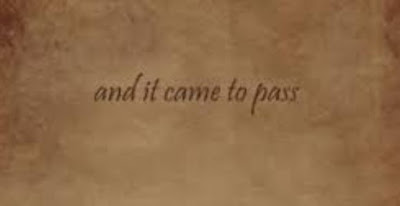 "And it came to pass as he prayed unto the Lord, there came a pillar of fire and dwelt upon a rock before him; and he saw and heard much; and because of the things which he saw and heard he did quake and tremble exceedingly." (1 Nephi 1:6)


Over the years one of the many criticisms of the Book of Mormon is what appears to be the overuse and apparently redundant phrase, "And it came to pass..."  In fact  Mark Twain in his review of the Book of Mormon and Joseph Smith made the remark, "And it came to pass’ was his pet. If he had left that out, his Bible would have been only a pamphlet.” (Roughing It,-American Publishing Co., 1901, p. 133.)

While Twain was an American literary genius his understanding of the phrase in Hebrew Scripture is a clear example of the difference in paradigm between the Israelite mind and the Gentile mind.  The phrase "And It Came To Pass" comes from the Hebrew word Vav-Hey-Yod-Hey (וְהָיָה) or Vehayah.  The word is also connected to the Hebrew word Vav- Yod -Hey - Yod (וַֽיְהִי). The idea behind the phrase has been taken to be a word signal describing future events or describing something next in a sequence of events.

The mystery of VeHaYAH however goes much deeper. As a Hebraic permutation on the Name of God YHVH (Yod-Hey-Vav-Hey) the word signifies the power or force behind the event or teaching being recorded. In other words it is a signal word that the hand of God is behind or involved in the event or teaching being recorded. It was also considered a power word by which the revelations, power, and gifts of God were made manifest in the world. It is also a marker denoting knowledge or teaching regarding God's protective power.

Like the word Amen, Ahman, or Ahmein, the word VeHaYah was also considered to be a prophetic marker for knowledge of events or teachings regarding the past, present, and future.  Among various Israelite mystery school traditions the word was considered a word of meditation and connection with God and the manifestation of his power in that praying or meditating upon this permutation of the name of God affected, influenced, or brought about the manner in which future events unfold. With respect to the Tree of Life it is connected to the attribute of YHVH known as chesed or loving kindness/mercy.

"And the LORD (YHVH) said, Behold, there is a place by me, and thou shalt stand upon a rock:

And it shall come to pass (HVYH), while my glory passeth by, that I will put thee in a clift of the rock, and will cover thee with my hand while I pass by" (Exodus 33:21-22)

The Book of Mormon as a Prophetic Israelite record makes usage of the familiar phrase 'And It Came To Pass' not only to indicate a sequence  of events as it is also used in the Bible, but it is also an indicator of the Hand of God in bringing forth a sealed revelation to the world as an act of Mercy.  It is an indicator of God's protective power in guiding the events of not only the Bible but also The Book of Mormon.  It also contains a mystery hidden in plain site designed to instruct future generations of believers in the prophetic "NOW" of God's presence and our ability to act as vessels of his Spirit.  When carefully inspected the phrase is a prophetic indicator of the active power of God and our connection with him in the events we experience in our lives as well. So what the wisdom of man sees as overused and redundant, the Wisdom of God reveals as a message, "The Kingdom of God is HERE NOW!"