The Hidden Mystery of Hagoth- The Gate of Translation 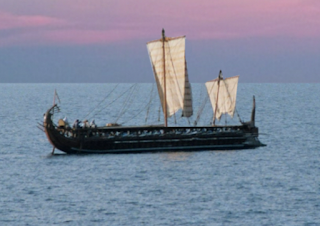 "And it came to pass that Hagoth, he being an exceedingly curious man, therefore he went forth and built him an exceedingly large ship, on the borders of the land Bountiful, by the land Desolation, and launched it forth into the west sea, by the narrow neck which led into the land northward." (Alma 63:5)

There has been much speculation about the man Hagoth who built ships and set sail with many people into the land northward. Some say he is the father of the Polynesians, while others suggest he and his people were the ancestors of varying other nations. Whatever genealogical implications the story may be, there is a much more ancient and hidden teaching associated with this exceedingly curious man.

The setting of Hagoth story actually commences in the preceding verse:

"And it came to pass that in the thirty and seventh year of the reign of the judges, there was a large company of men, even to the amount of five thousand and four hundred men, with their wives and their children, departed out of the land of Zarahemla into the land which was northward."

In the Israelite prophetic tradition, the direction north corresponds with the concept of strength and power-the abode of powers and principalities-the abode of the angelic. While the literal story portrays a group of people who built ships to sail to the land northward, the underlying prophetic story is about a group of people who transcended the natural man and ascended to the upper worlds.

The phrase "curious man" is an Israelite prophetic marker that connects the man Hagoth to Moses' tabernacle in the wilderness in specific the ephod of the High Priest:

"And the curious girdle of the ephod, which is upon it, shall be of the same, according to the work thereof; even of gold, of blue, and purple, and scarlet, and fine twined linen" (Exodus 28:8)

In other words, the usage of the description "curious man" is a marker that we are about to explore very ancient teachings connected with the temple of God.

The next word of importance is the meaning of the name 'Hagoth' itself. Besides carrying a relationship to the word Hagi meaning festive or an ingathering of people (which is very descriptive in itself as he did gather groups of people to carry them to the land northward, leading to a connection to the appointed times of Israel), there is an even more important and direct meaning connected to Hagoth.

"My mouth shall speak of wisdom; and the meditation of my heart shall be of understanding." (Psalm 49:3)

Here the word for meditation is the Hebrew word הָגוּת or Hagoth. It comes from the root word הָגָה hagah, meaning to growl, meditate, or the growling of a lion.  The usage of this word would draw the Israelite reader to the ancient teaching called "The roaring of the lions":

"And so great was the faith of Enoch that he led the people of God, and their enemies came to battle against them; and he spake the word of the Lord, and the earth trembled, and the mountains fled, even according to his command; and the rivers of water were turned out of their course; and the roar of the lions was heard out of the wilderness; and all nations feared greatly, so powerful was the word of Enoch, and so great was the power of the language which God had given him." (Moses 7:13)

Rather than just being an account of a Nephite who built ships to carry away his people to another land, the account of Haggoth is being included to preserve one of the most ancient teachings instructing us in the means of the transformation of the soul (nephesh) into a vessel that become a celestial vessel to follow in the ancient paths of Enoch, Melchizedek, Alma, and those 5,400 souls (including women and children).

"Therefore it became expedient for Shiblon to confer those sacred things, before his death, upon the son of Helaman, who was called Helaman, being called after the name of his father. Now behold, all those engravings which were in the possession of Helaman were written and sent forth among the children of men throughout all the land, save it were those parts which had been commanded by Alma should not go forth. Nevertheless, these things were to be kept sacred, and handed down from one generation to another; therefore, in this year, they had been conferred upon Helaman, before the death of Shiblon." (Alma 63:11-13)

In the Israelite prophetic tradition, the concept of engrave/engraved/ engravings carries a deeper meaning than just carving out letters on plates. It is connected to meditation or engraving on our minds and hearts.  Specifically, the word hakkak meaning to cut or engrave. The word hak representing the insertion of the spiritual into the physical. It also carries connections with progression from the physical to the spiritual, from being unclean to becoming pure. If we were to insert word meditations in for engravings:

""Therefore it became expedient for Shiblon to confer those sacred things, before his death, upon the son of Helaman, who was called Helaman, being called after the name of his father. Now behold, all those meditations which were in the possession of Helaman were written and sent forth among the children of men throughout all the land, save it were those parts which had been commanded by Alma should not go forth. Nevertheless, these things were to be kept sacred, and handed down from one generation to another; therefore, in this year, they had been conferred upon Helaman, before the death of Shiblon." (Alma 63:11-13)

In the Israelite mind, meditation is the idea of bonding or becoming one with God.  Alma then commanded that these meditations should be sent forth throughout the land. For what purpose? To lead the men, women, and children into a state of oneness and bonding with God.  Even the name Helaman is quite revealing.  Heh Ayin Lamed Mem:

Ayin Lamed Mem - That which is hidden or concealed

and carries with it other relationships to:

It is not coincidental that the Book of Alma (Ayin Lamed Mem) ends with the sending forth the sacred engravings/meditations to Helaman. With this in mind, it should then raise the question of what is really being concealed in The Book of Helaman.

Posted by Mormon Yeshiva at 5:59 PM