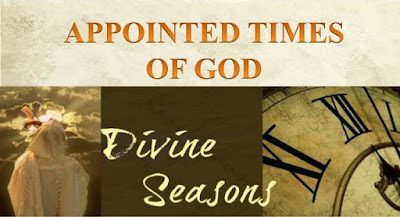 We seldom think about Biblical Holidays as anything more than a Jewish tradition. But these specific days were actually ordained by God and given to ALL of the House of Israel as perpetual ordinances. It is in these Appointed Times that we find the root of our tradition to engage in General Conference. One of the things we are to remember during the Holy Days are the covenants and promises of God's loving kindness, mercy and grace in history and the fulfillment in Jesus Christ. These set apart days point to God’s plan for all of mankind in regard to salvation and having a relationship with Him.

The appointed times were revealed by God to Adam in the Genesis of Creation, “Then Elohim said, 'Let there be lights in the firmament of the heavens to divide the day from the night; and let them be for signs and seasons (moed), and for days and years;'” - Genesis 1:14

The Hebrew word translated here as “seasons” is the word moed or moedim (plural). The word itself means: properly an appointment, that is, a fixed time or season; specifically a festival; conventionally a year; by implication, an assembly (as convened for a definite purpose); technically the congregation; by extension, the place of meeting; also a signal (as appointed beforehand): - appointed (sign, time), (place of, solemn) assembly, congregation, (set, solemn) feast, (appointed, due) season, solemn (-ity), synagogue, (set) time (appointed). (Strongs Condcordance From H3259)


Woven into the creation of the world God used the stars and planets to mark times and seasons.  The movement of the sun, moon and stars were provided not only for the calculation of time but for setting the appointed times when God was to meet with his people.  With this in mind, God designed an original science of astronomy to be used as prophetic markers that could not be altered by the hand of men.  His appointed times were part of his plan for man even before man himself was placed in the Garden.

Each week when we observe the Sabbath Day we are observing an Appointed Time.  The Feasts (or Appointed Times) of Israel are what are termed ‘High Sabbaths’.  Like the weekly Sabbath they are days specifically set apart by God for all his people to observe, “Speak unto the children of Israel, and say unto them, Concerning the feasts of the Lord, which ye shall proclaim to be holy convocations, even these are my feasts.

The keeping or remembering (to both say and to do) of the Appointed Times falls under the commandment, “Remember the sabbath day, to keep it holy. Six days shalt thou labour, and do all thy work: But the seventh day is the sabbath of the Lord thy God: in it thou shalt not do any work, thou, nor thy son, nor thy daughter, thy manservant, nor thy maidservant, nor thy cattle, nor thy stranger that is within thy gates: For in six days the Lord made heaven and earth, the sea, and all that in them is, and rested the seventh day: wherefore the Lord blessed the sabbath day, and hallowed it.”- (Exodus 20:8-11)

Besides fulfilling the commandment to ‘remember the Sabbath day to keep it holy’ the observance of God’s appointed times served as times for his people to come, appear before him, and call upon his name. In many ways the modern Mormon events of General Conferences and Solemn Assemblies echo back to the observance of these divine appointments.  Examples of the observance of God’s appointed times can be seen with Adam at Adam-Ondi-Ahman, Moses and Israel at Mount Sinai, Jacob and the Nephites at the Day of Atonement, King Benjamin at the Feast of Tabernacles, Christ at Passover, Christ at the Temple in Bountiful, Joseph Smith and the receipt of the plates at the Feast of Trumpets, Passover at the Kirtland Temple Dedication, among many others.

Besides the weekly Sabbath and the new moon of each month there are 7 High Holy Days appointed for all Israel to be observed through all their generations.


As we have previously shown the appointed times did not originate with Moses but were given in the creation to Adam and all his descendants.  Jesus said that He did not come to abolish the Law or the Prophets but to fulfill them. In Israelite culture to fulfill the law (Torah) is to observe God's commandments as given by God to Israel and to correctly interpret them. In addition, he also warned his disciples not to annul a commandment or to dissuade others from observing the commandments.

"Think not that I am come to destroy the law, or the prophets: I am not come to destroy, but to fulfil. For verily I say unto you, Till heaven and earth pass, one jot or one tittle shall in no wise pass from the law, till all be fulfilled. Whosoever therefore shall break one of these least commandments, and shall teach men so, he shall be called the least in the kingdom of heaven: but whosoever shall do and teach them, the same shall be called great in the kingdom of heaven." (Matthew 5:17-19)


How do the Appointed Times figure in with Prophecy?


The appointed times are prophetic pictures that teach about the Messiah!  The set-apart times are cycles that foretell the redemptive acts which Messiah was to perform for his people.  This is why all Israel gathered together at the temple or other appointed place to present themselves for and participate in divine rehearsals of those things which came before in preparation for those things which will come again.  From the Book of Mormon to the Book of Revelation, God uses the cycles of the appointed times and the instructions for carrying them out to prepare his people for their deliverance from bondage, his deliverance of the covenant, and his establishment of his reign over all the earth.

Besides honoring God and fulfilling his commandments, the Lord warns his people of pending judgment soon to be poured out upon our nation and gives them instructions regarding his appointed times.  The Lord commands his people to call your solemn assemblies:

"Hearken, O ye people of my church, saith the Lord your God, and hear the word of the Lord concerning you— The Lord who shall suddenly come to his temple; the Lord who shall come down upon the world with a curse to judgment; yea, upon all the nations that forget God, and upon all the ungodly among you. For he shall make bare his holy arm in the eyes of all the nations, and all the ends of the earth shall see the salvation of their God.

Wherefore, prepare ye, prepare ye, O my people; sanctify yourselves; gather ye together, O ye people of my church, upon the land of Zion, all you that have not been commanded to tarry-go ye out from Babylon, be ye clean that bear the vessels of the Lord, call your solemn assemblies, and speak often one to another. And let every man call upon the name of the Lord." (D&C 133:1-6)

Through the mouth of his Servant Joseph Smith, God has declared a curse of judgment upon the nations that forget God and upon all the ungodly. As a result the eyes of ungodly Nations and peoples shall see the revelation of  the arm of the Lord in the experiencing of these judgments to their destruction to their salvation.  Oh, The Greatness and the Mercy of our God, for even in the midst of judgment and calamities, he remembers his people both Gentile, Remnant, and Jews in giving them divine instructions to prepare them for the days ahead:

If you knew that the God of Heaven had set apart an Ordained Time to meet with his people, would you not want to know when these times were and what they were about so that you could prepare to meet the Creator of Heaven and Earth and be numbered among his people forever?  Or would you ignore these appointed times given to all the House Of Israel (THAT WOULD BE ALL THE TRIBES—INCLUDING EPHRAIM) as a perpetual law to observe for all time?  We speak of being called and numbered among the people of God but if we fail to recognize His covenant times and call is it possible we may miss the mark and find ourselves outside the camp of God’s people.

Posted by Mormon Yeshiva at 8:46 AM