THE MYSTERY OF ALMA- THE HIDDEN THINGS OF GOD 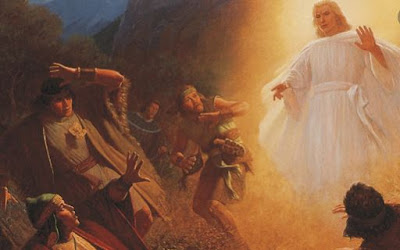 The Prophet Alma and his son Alma the younger stand as pivotal figures in The Book of Mormon. The usage of the name Alma seems strange and has been a focal point that many critics of the Book of Mormon zone in on as the name in Hebrew (Almah) means a young maiden/woman.  As the word is connected with something feminine in gender it would be highly irregular to name a male Israelite with this particular rendition of the word Almah. While at a cursory glance this criticism may appear to apply, in truth the name Alma reveals a hidden mystery and the deep Israelite roots of the Book of Mormon.


It has always been my contention that many of the names for people and places in The Book of Mormon are the phonetic spellings of Hebrew words into English.  The name Alma is one such name/word.   As mentioned, the Hebrew word Almah means a young maiden/woman. The first mention of this phrase in the Torah/Old Testament is in Genesis 24:43 where Abraham's servant Eliezar finds the young maiden Rebekah:

"Behold, I stand by the well of water; and it shall come to pass, that when the virgin (ALMAH) cometh forth to draw water, and I say to her, Give me, I pray thee, a little water of thy pitcher to drink..."

While in the King James Version the word was translated as virgin the more accurate translation would be a young maiden.  In Middle Eastern culture when young maidens were sent to a well or outside the home, the wearing of a veil was common.  Also the idea of children (both boys and girls) were considered to be under the covering/veil of their father.  Just as Almah is translated as young woman the word Elem is translated as young man or stripling.  The two words Almah and Elem share a common root as follows:

The connection between the two Hebrew words is not just in the description of a young man or woman, but of family members who come under the concealment or covering of their father. They both share the common base letters of Ayin- Lamed- Mem:

The base root Alam meaning something that is hidden or concealed. The beauty of the Book of Mormon is that in true poetic form, the text itself reveals the mystery of Alma's name using a poetic parallel and play on words:

But the king was more wroth
and caused that Alma
should be cast out from among them
and sent his servants after him
that they might slay him.

But he fled from before them
and hid himself
that they found him not
And he being concealed
for many days did write
all the words which Abinadi had spoken.
(Mos:17:3-4)


AN EVEN GREATER MYSTERY


The mystery of Alma does not stop there.  As the root of his name is constructed from the letters Ayin-Lamed-Mem we find an even greater mystery.  As we discussed in the articles regarding the 72 Names of God  we find couched in the Book of Mormon not only an ancient practice of meditation/prayer as taught in the prophetic schools of ancient Israel, but we also found that these names were connected to the Angelic language of God as given to the Prophet Enoch. In existing traditions of Judaism to this day, these 72 names were also connected to Angelic beings/forces.  Of note we find two in particular:

Among the 72 Names of God which is equated to angelic beings/forces we find the name ALMA (Ayin- Lamed- Mem) as the fourth name which in arrangement stands next to the fifth name Mem-Hey-Shin (associated with the Prophet Moses).  In traditional Jewish practice the 4th name Ayin -Lamed- Mem is pronounced phonetically "AA(long a)- LAH-Me" (short e).  That the 72 names capture the names of God associated with angelic forces or beings finds a unique fulfillment in The Book of Mormon as both Moses and Alma were taken by the Hand of God and translated into Heaven-i.e. They were angelified:

"And when Alma had done this he departed out of the land of Zarahemla, as if to go into the land of Melek. And it came to pass that he was never heard of more; as to his death or burial we know not of.Behold, this we know, that he was a righteous man; and the saying went abroad in the church that he was taken up by the Spirit, or buried by the hand of the Lord, even as Moses. But behold, the scriptures saith the Lord took Moses unto himself; and we suppose that he has also received Alma in the spirit, unto himself; therefore, for this cause we know nothing concerning his death and burial." (Alma 45)

Just as in the prophetic arrangement of the 72 names, we see Moses and Alma side by side connected to the idea of being angels or translated beings. We see the beauty of this mystery even as the Prophet Alma himself declares:

"O that I were an angel, and could have the wish of mine heart, that I might for forth and speak with the trump of God, with a voice to shake the earth, and cry repentance unto every people! Yea, I would declare unto every soul, as with a voice of thunder, repentance and the plan of redemption, that they should repent and come unto our God, that there might not be more sorrow upon all the face of the earth."