MORMON: THE BOOK OF PURE OR LIVING WATERS 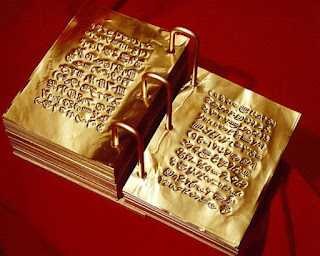 "And it came to pass that as many as did believe him did go forth to a place which was called Mormon, having received its name from the king, being in the borders of the land having been infested, by times or at seasons, by wild beasts. Now, there was in Mormon a fountain of pure water, and Alma resorted thither, there being near the water a thicket of small trees, where he did hide himself in the daytime from the searches of the king." (Mosiah 18:4-5)

Over the past year I have received significant outrage from some because of the usage of the word "Mormon" in my blog Mormon Yeshiva.  In fact saying the word "Mormon" in some circles is now treated more like a 4-letter word than with the sacredness it should be revered with. The beauty of the Book of Mormon as an Israelite document is that not only is the narrative designed to bring our hearts and minds back to the God of Israel, but even the many names used are designed to draw our attention to many ancient and sacred teachings meant to be passed down to future generations.  The word or name "Mormon" is one example of a sacred word meant to draw a picture to draw our hearts and minds to the source of all righteousness.

Many scholars have debated over the years about the meaning and etymology of the word Mormon.  In fact it was an object of much speculation during the time of Joseph Smith when some scholars began to attribute the word Mormon to a Greek word 'mormoo'  meaning a hob-goblin or spectre.  In more recent LDS circles the name was associated with the idea of meaning "more good".  But the peoples oF the Book of Mormon were an Israelite people with deeply rooted Israelite/Jewish origins.  Examining the word "Mormon" from this perspective reveals an ancient Israelite teaching hidden in plain sight.


THE BEAUTY OF THE WORD "MORMON":


In Hebrew the word Mormon would be connected to the Hebrew root of Mem- Resh- Mem***:

Here the letter MEM carries the meaning of water as in waves of waters which can be clearly demonstrated from the Early Hebrew more so than in the Modern Block style hebrew that came into predominate use after the Babylonian captivity.

The Letter Resh is pictured as follows:

Here the letter Resh is puctured in the Early Hebrew as a head and is where we get the concepts associated with Rosh Hashana (Head of the Year) and Rosh Chodesh (Head of the Month).  It also carries with it the idea of being the origin or source of something.

If we put these these ideas and word pictures together we see that the word Mormon from the root Mem- Resh- Mem or even the base root Resh Mem carries with it the meaning of "The source, origin, or head of waters".   We find this idea demonstrated in the Book of Mormon in the Book of Mosiah where the name Mormon and it's origin are explained:

"And it came to pass
that as many as did believe him did go forth
to a place which was called Mormon
having received its name from the king
being in the borders of the land
having been infested
by times or at seasons
by wild beasts.

Now, there was in Mormon
a fountain of pure water
and Alma resorted thither,
there being near the water a thicket of small trees
where he did hide himself in the daytime
from the searches of the king."
(Mosiah 18:4-5)

A fountain is the head or source of water.  The source or head of the waters is where we would find the purest waters coming forth. The idea of a pure fountain is connected to the idea of living waters that come from the fountain head which in Israelite theology comes from the Throne of God and The Tree of Life. We see this concept demonstrated earlier in record of 1st Nephi:

The concept of Living Waters is among the most ancient of symbols employed in the TaNaKh (Old Testament) as well as in the writings of the New Testament.  The idea of living waters is connected to the grace and mercy (chesed) of God but is also a symbol for the living revelations that proceed forth from the Throne of God.  The fountain/head/ or source of these waters is the mouth of God himself as all the words or revelations of God are considered living waters.  This same concept is also preserved in the words of the Messiah:

"He that believeth on me, as the scripture hath said, out of his belly shall flow rivers of living water." (John 7:38)

"Jesus answered and said unto her, If thou knewest the gift of God, and who it is that saith to thee, Give me to drink; thou wouldest have asked of him, and he would have given thee living water." (John 4:10)

In addition to this, the concept of ritual immersion called tevilah (often associated with baptism by immersion) in living waters or a gathering of waters (Mikveh) demonstrates this idea of being immersed not only in the grace and mercy of God but also in his word.  The Book of Mormon also preserves this ancient teaching where Alma the elder and his followers are baptized/immersed in the waters of Mormon:

"And it came to pass that he said unto them: Behold, here are the waters of Mormon (for thus were they called) and now, as ye are desirous to come into the fold of God, and to be called his people, and are willing to bear one another’s burdens, that they may be light;

Yea, and are willing to mourn with those that mourn; yea, and comfort those that stand in need of comfort, and to stand as witnesses of God at all times and in all things, and in all places that ye may be in, even until death, that ye may be redeemed of God, and be numbered with those of the first resurrection, that ye may have eternal life—Now I say unto you, if this be the desire of your hearts, what have you against being baptized in the name of the Lord, as a witness before him that ye have entered into a covenant with him, that ye will serve him and keep his commandments, that he may pour out his Spirit more abundantly upon you?

And now when the people had heard these words, they clapped their hands for joy, and exclaimed: This is the desire of our hearts.And now it came to pass that Alma took Helam, he being one of the first, and went and stood forth in the water, and cried, saying: O Lord, pour out thy Spirit upon thy servant, that he may do this work with holiness of heart.

And when he had said these words, the Spirit of the Lord was upon him, and he said: Helam, I baptize thee, having authority from the Almighty God, as a testimony that ye have entered into a covenant to serve him until you are dead as to the mortal body; and may the Spirit of the Lord be poured out upon you; and may he grant unto you eternal life, through the redemption of Christ, whom he has prepared from the foundation of the world. And after Alma had said these words, both Alma and Helam were buried in the water; and they arose and came forth out of the water rejoicing, being filled with the Spirit. And again, Alma took another, and went forth a second time into the water, and baptized him according to the first, only he did not bury himself again in the water." (Mosiah  18:8-15)

Here the waters of Mormon (or the fountain of pure/living water) was the location where ritual immersion could take place legally fulfilling the legal requirements of this ordinance.  Over the years I have had people ask the question why did not Alma baptize like we do but instead go under the water himself.  This patter of immersion is actually quite traditional and is still preserved in some sects of Judasim to this day where at the commencement of a ritual immersion the priest or rabbi would go down under the water with the first recipient to be immersed.  In other words, the picture being described is very Israelite/Jewish.

WHEN THE WATERS BECOME FILTHY


Connected with the idea of pure of living/water we also see it's opposite portrayed in the vision of Nephi:

"And the angel spake unto me, saying: Behold the fountain of filthy water which thy father saw; yea, even the river of which he spake; and the depths thereof are the depths of hell." (1 Nephi 12:16)

And they said unto me: What meaneth the river of water which our father saw?

Many critics of The Book of Mormon zone in on this "apparent contradiction" where Lehi describes a fountain of living waters and then Nephi describing the filthiness of the water.  However if we understand that the symbolism of the living waters also represents the pure revelations of God that come from his head/fountain/or source then Nephi's description of the waters as filthy would represent the corruption or pollution of the pure revelations of God.  In fact we see this motif played out in Nephi's description of  the taking away or many plain and precious truths:

"Wherefore, these things go forth from the Jews in purity unto the Gentiles, according to the truth which is in God. And after they go forth by the hand of the twelve apostles of the Lamb, from the Jews unto the Gentiles, thou seest the formation of that great and abominable church, which is most abominable above all other churches; for behold, they have taken away from the gospel of the Lamb many parts which are plain and most precious; and also many covenants of the Lord have they taken away. And all this have they done that they might pervert the right ways of the Lord, that they might blind the eyes and harden the hearts of the children of men." (1 Nephi 13:25-27)


THE BOOK OF PURE OR LIVING WATERS


The beauty of the word Mormon being associated with Pure of Living Waters carries with it deep Israelite roots and teachings.  Perhaps by re-examining this precious word we will begin to look beyond the Title of "The Book of Mormon"  to see its as "The Book of Pure or Living Waters" as this record was written to restore many of those plain and precious truths. And those who call themselves by that name being like Alma's followers having immersed themselves into the Pure or Living Waters of God.

*** The paleo-Hebrew graphics used in this article were taken from the marvelous work done by Jeff Benner.  Please check out his work at ancient-hebrew.org
Posted by Mormon Yeshiva at 2:16 PM