THE ROARING OF THE LIONS AND THE TONGUE OF ANGELS 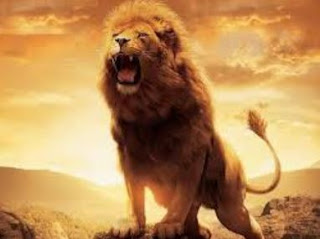 "The lion hath roared, who will not fear? the Lord God hath spoken, who can but prophesy?"
(Amos 3:8)

In a prior article (see THE RESTORATION OF MIRACLES: THE BOOK OF MORMON AND THE 72 NAMES OF GOD)  we discussed the Israelite discipline of contemplative/meditative prayer as part of the prophetic teachings of Israel.  Among these teachings is the meditative practice known as calling on or upon THE NAME (YHVH).  References to this discipline have been recorded in many ancient texts such as The Sepher Yetzirah, The Bahir, The Zohar with many Jewish scholars pointing to the Prophet Enoch as the source of this great teaching.  While the 72 names of God are not names like Tom, Dick, or Harry, they were considered conduits through which the light of God is manifest in this world.

Among some of the oldest teachings preserved by the various traditions in Judaism regarding this discipline is a teaching often referred to as the 'Roaring of the Lions'.  This teaching is still to be found among various teachers such as Moses ben Nachman and Isaac Luria. This teaching is connected with the idea that both the voice of God and his angels are like unto a lion's roar. In some traditions it is referred to as the language of angels (mal'akim)  It is expressed by the prophet Amos wherein he declares, "The lion hath roared, who will not fear? the Lord God hath spoken, who can but prophesy?"

In the Israelite prophetic tradition, it was taught that the 'Roaring of the Lions" was connected to the 72 letter name of God (72 names x 3 letters each = 216 letters) and the prayer/meditative discipline connected with it.  Those disciples who walked the paths of the prophetic undertook this discipline to connect with Heaven. It was taught that when the names were pronounced as one was filled with the ruach or spirit that the power of God would then be made manifest to fulfill the will of God. In following the prophetic science we find that the 216 letter name is equated to the word gevurah (strength) whose numeric value is also 216 and with the word aryeh (lion) whose numeric value is also 216, thus yielding the spiritual equation or teaching called 'The Roaring of the Lions'. 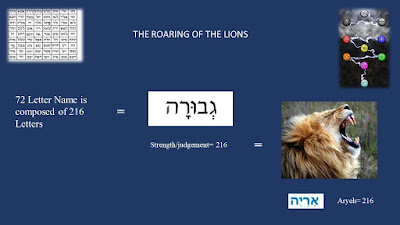 The Pearl of Great Price and The Roaring of the Lions


As we read through the scriptures of the restoration, we often pass-over (no pun intended) some of the greatest of truths standing before our very eyes.  In the Pearl of Great Price we read the record of Moses regarding the Prophet Enoch and the establishment of Zion:

"And so great was the faith of Enoch that he led the people of God, and their enemies came to battle against them; and he spake the word of the Lord, and the earth trembled, and the mountains fled, even according to his command; and the drivers of water were turned out of their course; and the roar of the lions was heard out of the wilderness; and all nations feared greatly, so powerful was the word of Enoch, and so great was the power of the language which God had given him.” (Moses 7:13)

Here it is recorded that the "word" and the "power of the language" of the Prophet Enoch was so great that nations stood afar off, the earth trembled, and the mountains fled.  Hidden in plain site among the records of the restoration we find the same ancient teaching associated with Enoch that was passed down through the House of Israel regarding a "spiritual technology" given to the fathers by which they and those prophets of Israel connected with God and made manifest the powers of Heaven according to the principles of righteousness.


THE TONGUE OF ANGELS:

This ancient teaching is what came to be connected to the Israelite concept of "the tongue of Angels".  It was a gift and teaching open to all who sought to walk in the path of the ancients. It was this same teaching referred to by the Prophet Nephi in the Book of Mormon. After explaining that we are to enter in by the gate, he explains,"For the gate by which ye should enter is repentance and baptism by water; and then cometh a remission of your sins by fire and by the Holy Ghost...And now, my beloved brethren, after ye have gotten into this strait and narrow path, I would ask if all is done?

He then goes on:

"Behold, I say unto you, Nay; for ye have not come thus far save it were by the word of Christ with unshaken faith in him, relying wholly upon the merits of him who is mighty to save.Wherefore, ye must press forward with a steadfastness in Christ, having a perfect brightness of hope, and a clove of God and of all men. Wherefore, if ye shall press forward, feasting upon the word of Christ, and endure (heb. walk forward on the path) to the end, behold, thus saith the Father: Ye shall have eternal life.

After entering in by the gate we then find ourselves in the way.  It is here that the prophet Nephi once again touches on this ancient teaching known as the language of angels, the 72 letter name of God, aka the roaring of the lions:

"And now, behold, my beloved brethren, I suppose that ye ponder somewhat in your hearts concerning that which ye should do after ye have entered in by the way. But, behold, why do ye ponder these things in your hearts?

Wherefore, now after I have spoken these words, if ye cannot understand them it will be because ye ask not, neither do ye knock (hebrew code phrase equated with prayer/meditation/ calling upon the name); wherefore, ye are not brought into the light, but must perish in the dark." (2 Nephi 32:1-4)

Posted by Mormon Yeshiva at 9:50 AM