ARE YOU WHITE AND DELIGHTSOME? 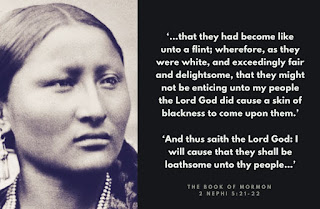 "And then shall they rejoice; for they shall know that it is a blessing unto them from the hand of God; and their scales of darkness shall begin to fall from their eyes; and many generations shall not pass away among them, save they shall be a pure (white) and a delightsome people." (2 Nephi 30:6)

It still amazes me at how often this subject comes up.  The other day I was talking with a young man who was struggling with certain subjects in regard to the Book of Mormon.  He stated that the Book of Mormon was "racist" and as such, could never believe in a God who is a racist.  In confusion, I asked him why he believed that God is a racist when the scriptures clearly say:

"For none of these iniquities come of the Lord; for he doeth that which is good among the children of men; and he doeth nothing save it be plain unto the children of men; and he inviteth them all to come unto him and partake of his goodness; and he denieth none that come unto him, black and white, bond and free, male and female; and he remembereth the heathen; and all are alike unto God, both Jew and Gentile." (2 Nephi 26:33)

He stated that the God of the Book of Mormon was racist and that the Book of Mormon was racist because it clearly states that God only favored white people.  He then quoted the often debated phrase, "they shall be a pure/white and delightsome people".  He then proceeded to explain to me that it had been changed to "pure" in modern Books of Mormon to support the current "non-racist" image. Needless to say I was a little shocked.  How do we resolve the statement from God that he forbids none to come to him and then turn around and say that people are cursed with a skin of blackness:

"And he had caused the cursing to come upon them, yea, even a sore cursing, because of their iniquity. For behold, they had hardened their hearts against him, that they had become like unto a flint; wherefore, as they were white, and exceedingly fair and delightsome, that they might not be enticing unto my people the Lord God did cause a skin of blackness to come upon them." (2 Nephi 5:21)

At first glance from examining these scriptures it would appear from a cursory reading that his conclusions were supported. But the Book of Mormon is an Israelite Book and is full of cultural expressions unique to Israel and the Middle East that modern Mormons are not often familiar with. In the United States, we often think in concrete terms of "Black and White" especially when it comes to race.  But our terminology and cultural expression is far from that of ancient Israel and a Torah Observant Culture.

In reading the Book of Mormon, it is helpful to approach the text as an ancient Israelite text.  In other words, we are reading phrases from another culture.  As such, there are many phrases that are common to an Israelite that would be completely foreign to modern Americans.  Let's examine a few:


At first glance it would appear that God is referring to the Lamanites as being cursed with a black skin.  The cursing of the Lamanites first had to do with iniquity (i.e. lawlessness).  In other words, the Lamanites left the observance of the Torah.  In doing so they, "hardened their hearts" or in other words their thoughts, desires, and works were contrary to God's commandments.  The idea that they had become like unto flint is an expression that can be seen in other references in the Old Testament (TaNaKh)  for example:

"I gave my back to the smiters, and my cheeks to them that plucked off the hair: I hid not my face from shame and spitting. For the Lord GOD will help me; therefore shall I not be confounded: therefore have I set my face like a flint, and I know that I shall not be ashamed." Isaiah 50:6-7

The expression face like flint and like unto flint is an expression that does not refer to skin color but to their attitude and disposition; in the case of the lamanties their attitude and disposition toward God's laws.  In other words, they became hardened against observing the commandments of God. Part of these commandments given to ancient Israel were in regard to intermarriage with those who did not hold to the God of Israel, "Neither shalt thou make marriages with them; thy daughter thou shalt not give unto his son, nor his daughter shalt thou take unto thy son. For they will turn away thy son from following me, that they may serve other gods: so will the anger of the LORD be kindled against you, and destroy thee suddenly." (Deuteronomy 7:3-4)

The expression "skin of darkness" has two connotations.  In ancient Israel it was an expression that could  relate to one who intermarried with one who did not adhere to God's covenant with Israel. It also had a much more ancient meaning related to an incident in the Garden of Eden, "Unto Adam also and to his wife did the LORD God make coats of skins, and clothed them." (Genesis 3:21)  The coats of skins being a reference not only to their covering but specifically being clothed by God-which is also a reference to walking under his dominion and commandments.

That there may have been changes in skin tone through intermarriage with other cultures may have occurred as Israel was scattered to the four corners of the earth and intermingled with all the nations, but the phrases which appear to refer to God turning someone "black" have much less to do with skin tone and much more to do with their observance of his commandments.


This brings us to the phrase "white and delightsome".  At first glance from our culture, it may appear to some that God prefers only those with white skin or that the gates to the New Jerusalem are labeled with "Whites Only!" signs.  This is not the case.

The expression white and delightsome is a Hebrew expression referring to any person's condition. For example:

Here the concept of sins being "white" is in reference to cleanliness or "being made clean" before the Throne of God.  In particular, these are people whose sins have been covered by atonement.  It also has reference to people who lived in a manner of being clean before God with specific reference to the cleanliness laws of Israel (i.e. they didn't drink blood, they didn't eat unclean animals, i.e. they kept Kosher).

The phrase delightsome is an interesting expression but is found with specific reference in the Book of Psalms:

The delight of YHVH or to have delight in YHVH was to delight or desire to keep his Law- His Torah.  In other words to be delightsome was to be Torah Observant or Obedient to God's commandments.

White and Delightsome is to be clean and obedient to God's Commandments or Clean and Torah Observant.

Posted by Mormon Yeshiva at 7:32 AM