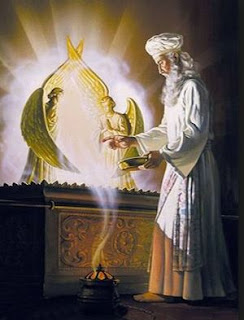 In response to the article that I wrote entitled "Was Zoram a Levite?" I have had several emails asking me to explain how Jacob and Joseph, the sons of Lehi, who were not Levites or descendants of Aaron could be set apart as Priests.  Often when we think of the word 'priest" images of Catholic priests, etc come to mind.  The idea of priest in the Israelite mind had more to do with function and service rather than just an office.

Traditionally in many sects of Judaism it has been maintained that for a person to be a priest (Kohen) they must therefore be a Levite or more particularly a descendant of Aaron the brother of Moses.  In regard to specific civil and religious service (example Service at the Temple/Tabernacle in the Wilderness) this would be true. However, the word Kohen does not specifically refer to just Levites or descendants of Aaron.  While the the word Kohen is translated as Priest it is not necessarily synonymous with descendants of Levi or Aaron.  In particular the word Kohen while translated into the English word as Priest more accurately could be translated as officiator.  For example

"And Melchizedek king of Salem brought forth bread and wine: and he was the priest (kohen) of the most high God." (Genesis 14:18)

"And Pharaoh called Joseph's name Zaphnathpaaneah; and he gave him to wife Asenath the daughter of Potipherah priest (kohen) of On. And Joseph went out over all the land of Egypt." (Genesis 41:45)

"When Jethro, the priest (kohen) of Midian, Moses' father in law, heard of all that God had done for Moses, and for Israel his people, and that the LORD had brought Israel out of Egypt" (Exodus 18:1)

"Only the land of the priests (kohanim) bought he not; for the priests had a portion assigned them of Pharaoh, and did eat their portion which Pharaoh gave them: wherefore they sold not their lands."

So while tradition has come to equate the words kohen with a Levite or descendant of Aaron, the more accurate usage of the word in the Torah was much broader in application with the term kohen more accurately being defined as officiator who engaged in a particular type of service.  Hebrew is a highly "functional language" in that instead of just describing something in mechanical, concrete terms it is also  describes things in terms of their function.  In our western minds we often equate the term priest with a specific "office" or station, but in Hebrew the word priest (kohen) more specifically delineates function.  As such, in the Israelite mind the word kohen is more connected to a function or type of service.


In Alma we encounter the idea of the "Holy Order" of God.  Over the years, I have heard many attempt to equate the expression "Holy Order" with a special club or elite group.  In the Israelite mind the word order is more accurately translated as 'manner' or 'pattern'.  For example:

"The LORD hath sworn, and will not repent, Thou art a priest (kohen) for ever after the order of Melchizedek." (Psalms 110:4)

Here the word 'order' is the Hebrew word dibrah meaning manner or cause.  Instead of the word order being seen as an order say like a club or elite groups (say like the Order of the Elks, etc) it is describing a type of function.  In further examining Alma, we see this same idea:

"And again, my brethren, I would cite your minds forward to the time when the Lord God gave these commandments unto his children; and I would that ye should remember that the Lord God ordained priests (kohanim), after his holy order (manner), which was after the order (manner) of his Son, to teach these things unto the people." (Alma 13:1)


In true Israelite fashion, Alma gives us the definition of "order" in a Hebrew parallelism that he crafts in the next two verses:

Hebrew is an amazing.language and culture.  Alma in true prophetic and poetic Hebrew fashion draws upon the Holy Writings of Israel such as Psalms and then weaves his intended meaning in a Hebrew word play in his next few verses.  Alma equates the word 'order' with the word 'manner'.  This 'manner' is referring to a function, manner, or type of service.

What type of Manner or Service?


After explaining that there is a holy "manner" or service, Alma then begins to describe their service drawing upon Melchizedek the Kohen of the Most High God.

Now this Melchizedek was a king over the land of Salem; and his people had waxed strong in iniquity and abomination; yea, they had all gone astray; they were full of all manner of wickedness;

But Melchizedek having exercised mighty faith, and received the office of the high priesthood according to the holy order of God, did preach repentance unto his people. And behold, they did repent; and Melchizedek did establish peace in the land in his days; therefore he was called the prince of peace, for he was the king of Salem; and he did reign under his father." (Alma 13: 16-18)

Melchizedek's manner or "service" was to follow in the path of the Messiah in preaching repentance and establishing covenant peace in his land.  Shalom or 'covenant peace' encompassed not only repentance but re-establishing the presence and society of God among his people.  His function or service had nothing to do with Levitical or Aaronic temple service that existed in the nation of Israel.

Jacob and Joseph - Sons of Lehi

Jacob and Joseph, the sons of Lehi, were set apart as priests (kohanim) and teachers. Their designation as priest (kohen) does not equate with the service of a Levite or descendant of Aaron.  In the Torah (Five Books of Moses) God lays out specific types of service or functions of the both the Levites and the descendents of Aaron in regard to their civil and religious functions in the body of Israel. For example, the descendants of Aaron were responsible for the care and keep of the Temple including its implements. They played particular roles in temple and civil service.

The sons of Lehi were not Levitical priests but they were officiators after a specific manner or type of service. Jacob the son of Lehi gives specific detail into the nature of their priestly service:

"For I, Jacob, and my brother Joseph had been consecrated priests and teachers of this people, by the hand of Nephi. And we did magnify our office unto the Lord, taking upon us the responsibility, answering the sins of the people upon our own heads if we did not teach them the word of God with all diligence; wherefore, by laboring with our might their blood might not come upon our garments; otherwise their blood would come upon our garments, and we would not be found spotless at the last day.

For Jacob and Joseph, their priestly service entailed teaching the people the word of God with all diligence and laboring to bring them to a state of cleanliness or repentance.  Their priestly service echoes that of Melchizedek.  Their type of service did not entail the specific temple duties, etc of the Levites as described in the Books of Moses.  Jacob and Joseph's designation as kohanim does not negate or replace the legal service of Levites under the Torah of Moses.  Their order, manner, or type of service as a priest (kohen) was just different.  Zoram as a Levite and most likely a descendant of Aaron, would allow for the Nephites to strictly observe the Law of Moses in accordance with those duties specifically assigned to the sons of Levi being performed by Levites.

We must be careful not to overlay modern ideas regarding priesthood with those of Ancient Israel and the Middle East.  We do not know all the duties that Jacob and Joseph engaged in, but their designation as priest (kohen) was not a violation of Torah or an infringement on the lawful duties of the Levites.  With Zoram as a Levite being present, the strict observance of the Torah of Moses was maintained as all required legal elements would have been present.