MANIFESTING THE POWER OF GOD (PART 1) 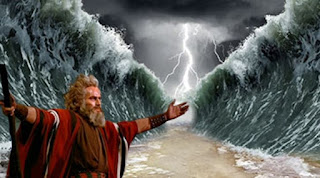 Behold, the Lord esteemeth all flesh in one; he that is righteous is favored of God. But behold, this people had rejected every word of God, and they were ripe in iniquity; and the fulness of the wrath of God was upon them; and the Lord did curse the land against them, and bless it unto our fathers; yea, he did curse it against them unto their destruction, and he did bless it unto our fathers unto their obtaining power over it.” (1 Nephi 17:32-35)

According to his Power God drove out the inhabitants of the Land of Israel to destruction because of iniquity or lawlessness.  According to the Mercy of God (Chesed) he demonstrates his blessing upon the Fathers.  This passage is a key to the righteous manifestation of God’s Power – either to blessing or cursing.  It is a key to mystery of the power of Godliness being made manifest unto the children of men in the flesh.  Those who follow the path of the Holy Order of the Son of God accomplish all things according to his will.  In doing so they seek to balance the attributes of Power and Long Suffering just as Christ demonstrated this balance of these attributes.  Doing all things according to his “Word” is a Hebrew play on “words” meaning according to the commandments of God (Torah) and in the manner demonstrated by the Son (Sermon on the Mount) in order to bring oneness.

This important teaching is why so many fail to manifest the Power of God.  The natural man resorts to his own authority and office to both bless and curse while the spiritual child of God seeks only to manifest the power of God to bring about a condition of oneness through blessing, or destruction through cursing when the fullness of iniquity (lawlessness) is reached.  It is never done to exert unrighteous dominion over someone or something-only to bring about oneness.  At times bringing about oneness with God involves blessing and at other times it involves setting them apart to destruction or cursing to bring about repentance. The deciding factor - the lawlessness of the people.


RESTORING MIRACLES AND THE REASON WHY MIRACLES CEASE

The prophet Mormon demonstrates this teaching:

"And if there were miracles wrought then, why has God ceased to be a God of miracles and yet be an unchangeable Being? And behold, I say unto you he changeth not; if so he would cease to be God; and he ceaseth not to be God, and is a God of miracles."

And the reason why he ceaseth to do miracles among the children of men is because that they dwindle in unbelief, and depart from the right way, and know not the God in whom they should trust.

Behold, I say unto you that whoso believeth in Christ, doubting nothing, whatsoever he shall ask the Father in the name of Christ it shall be granted him; and this promise is unto all, even unto the ends of the earth." (Mormon 9:19-21

The God of Israel is the same yesterday, today, and forever.  He is a God of miracles but the reason why his miracles cease is because the people fall away in unbelief and depart from the right way.  This declaration is a Hebrew play on words where unbelief parallels departing from the right way.  To an Israelite "the way" is the Torah and the commandments of God.  In departing from God's way they walk another path and as a result they do not "know" or experience the God of Israel and his blessings.  Those who walk in another way seek to supplant God's laws with laws of their own device and making.

The promise reiterated in the Book of Mormon by Mormon that is given unto all the ends of the earth is one of the greatest gifts of God given to those who would be his bride.  For those who would make themselves ready for the Bridegroom and King, the betrothal gifts are given to prepare the bride for her marriage.  In Israelite understanding the promise could be restated in a little more modern vernacular:

"Understand and Comprehend, I say unto you that whoever desires to follow Messiah, with a decisive mind to do so, whatever he shall ask of the Father to fulfill the commandments of the Messiah it will be granted him (her); and this promise is unto all, even to the ends of the earth"

The question we must ask ourselves consistently in our covenant requests to the Father is "Are we asking for Gifts (gifts of the spirit, etc) to fulfill God's commandments and to bring about a state of oneness with him.  If we are, then we must ask ourselves what law are we seeking to establish in our life or the life of another:

"There is a law, irrevocably decreed in heaven before the foundations of this world, upon which all blessings are predicated— And when we obtain any blessing from God, it is by obedience to that law upon which it is predicated." D&C 130:20-21

"Wherefore, beware lest ye are deceived; and that ye may not be deceived seek ye earnestly the best gifts, always remembering for what they are given; For verily I say unto you, they are given for the benefit of those who love me and keep all my commandments, and him that seeketh so to do; that all may be benefited that seek or that ask of me, that ask and not for a sign that they may consume it upon their lusts."  (D&C 46:8-9)

As the Messiah stated, "if you love me keep my commandments".  The love of God - his blessings and cursing- is tied to his commandments (mitzvot) being established in our lives and society.  Our goal is to bring about a state of oneness with God by establishing his commandments in our lives.  The gifts of God are given as grace to enable us to do just that.  They are not given because of our membership in the church, our priesthood office, or that we might perform magic tricks.  The gifts of God are given to bring about a condition of oneness with him and this oneness entails establishing his commandments both written and spoken.

"And now I speak unto all the ends of the earth—that if the day cometh that the power and gifts of God shall be done away among you, it shall be because of unbelief.

And wo be unto the children of men if this be the case; for there shall be none that doeth good among you, no not one. For if there be one among you that doeth good, he shall work by the power and gifts of God."

In the Israelite mind, that which is "Good" is that which leads us to fulfill the commandments of God.  Here Moroni states that if the gifts of God cease it is because people have left the path of belief (Torah) and begun to walk the path of unbelief (anti-Torah).  For if there be anyone that establishes God's covenant law he must do so by the enabling power and gifts of God. The one being tied to the other.

God gives his children grace, or enabling power, to establish and maintain their covenant relationship and society with him.  When we depart either as an individual or society the gifts of God cease because we are then walking in a path that does not establish his laws and dominion. This teaching on the manifestation of God’s Power and Long Suffering either to blessing or cursing was also discussed by the Fathers:

“For God having sworn unto Enoch and unto his seed with an oath by himself; that every one being ordained after this order and calling should have power (gevurah), by faith, to break mountains, to divide the seas, to dry up waters, to turn them out of their course; To put at defiance the armies of nations, to divide the earth, to break every band, to stand in the presence of God; to do all things according to his will, according to his command, subdue principalities and powers; and this by the will of the Son of God which was from before the foundation of the world. And men having this faith, coming up unto this order of God, were translated and taken up into heaven.” (JST Genesis 14:30-32)

Nephi continues to draw this contrast between the Power of God and the Long Suffering of God.  Like Christ who stated, “If you love me keep my commandments.” Nephi explains that the balancing and demonstration of God’s Power and Long Suffering involve loving God:

“And he loveth those who will have him to be their God. Behold, he loved our fathers, and he covenanted with them, yea, even Abraham, Isaac, and Jacob; and he remembered the covenants which he had made; wherefore, he did bring them out of the land of Egypt.” (1 Nephi 17:40)

God’s attributes of Power and Mercy enable him to bless and curse in order to bring at-one-ment or a state of oneness with him, “And he did straiten them in the wilderness with his rod; for they hardened their hearts, even as ye have; and the Lord straitened them because of their iniquity. He sent fiery flying serpents among them; and after they were bitten he prepared a way that they might be healed; and the labor which they had to perform was to look; and because of the simpleness of the way, or the easiness of it, there were many who perished. And they did harden their hearts from time to time, and they did revile against Moses, and also against God; nevertheless, ye know that they were led forth by his matchless power into the land of promise” (1 Nephi17:41-42)