WALKING THE ANCIENT PATHS- THE BOOK OF MORMON AS COVENANT 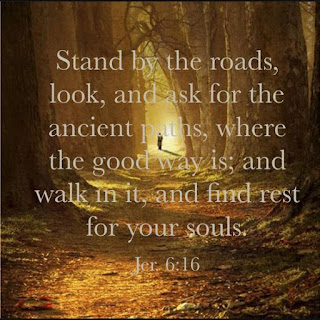 Thus says the LORD: “Stand by the roads, and look,and ask for the ancient paths,where the good way is; and walk in it,and find rest for your souls…” (Jeremiah 6:16)

"And your minds in times past have been darkened because of unbelief, and because you have treated lightly the things you have received— hich vanity and unbelief have brought the whole church under condemnation. And this condemnation resteth upon the children of Zion, even all.

And they shall remain under this condemnation until they repent and remember the new covenant, even the Book of Mormon and the former commandments which I have given them, not only to say, but to do according to that which I have written— That they may bring forth fruit meet for their Father’s kingdom; otherwise there remaineth a scourge and judgment to be poured out upon the children of Zion." (D&C 84:54-58) 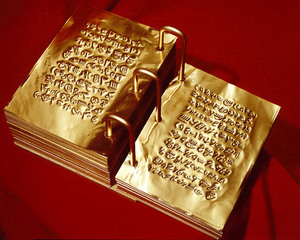 To understand the nature of Israelite Covenants it is necessary to explore the covenant structure of the Torah (Old Testament).  While there are many different covenant models many of these models can be distilled down to five essential components that can be found in all ancient/near eastern covenants.
This Pattern is demonstrated in the Five Books of Moses as Found in the Old Testament (Torah) from left to right: 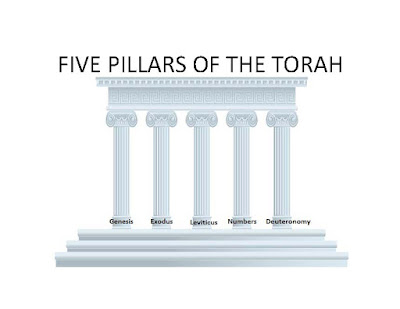 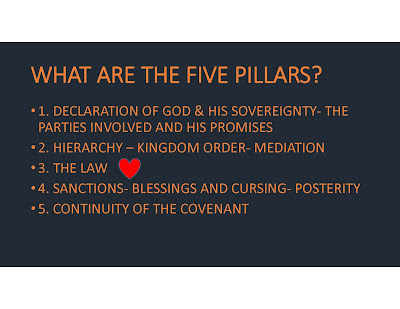 1. The Declaration of the Covenant comprises the Book of Genesis.  It is here that God's authority and dominion are established along with the promises made to the father upon which the terms of the covenant are founded.

2. The Hierarchy-Kingdom Order- and terms of Mediation are demonstrated in the Book of Exodus.  Exodus demonstrates the pattern that God establishes his covenant society, government, and social order upon.

3. The Law or Heart of the Covenant is Demonstrated by the Book of Leviticus and is the handbook or community rules that establish Holiness and Sacred Space.

4.  Sanctions- Blessings and Cursings- Posterity-- are demonstrated by the Book of Numbers where in the the instructions regarding posterity are found and penalties of the covenant obedience and disobedience are demonstrated.

5. Continuity.  Continuity of Covenant is the means by which the covenant is to be communicated through successive generations.


In true Israelite fashion the Book of Mormon also follows this covenant pattern. 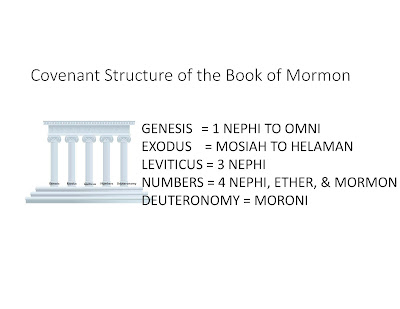 What we are after is the "Heart" of the Covenant. As once the seed that God desires to plant in our hearts takes root, we receive the name of Christ/Messiah and conform to his image.  Having conformed to his image we are then able to produce the fruits that God desires us to bring forth. These words are not just symbolic but literal. Our God is a covenant making and keeping God. His Kingdom or righteous dominion is established and governed by covenant. Those who would enter by some other way are "thieves and liars" because without the grant of a covenant they have no claim on the promises God made to the Fathers.  With regard to the Book of Mormon, the fathers we are speaking of are Lehi, Nephi, Jacob, Enos, down to Omni.  Their record comprises God's revelation of himself and a declaration of his sovereignty.

PROMISES MADE TO THE FATHERS & THE BOOK OF MORMON FATHERS

Notice that the covenant of Lehi is derivative of Israel's covenant relationship with the Fathers (Abraham, Isaac, Jacob, Joseph), which is why he goes to lengths to point out that he is a descendant of Joseph (one of the Fathers to whom God made covenant with in the Book of Genesis):

"And it came to pass that my father, Lehi, also found upon the plates of brass a genealogy of his fathers; wherefore he knew that he was a descendant of Joseph; yea, even that Joseph who was the son of Jacob, who was sold into Egypt, and who was preserved by the hand of the Lord, that he might preserve his father, Jacob, and all his household from perishing with famine." (1 Nephi 5:14)

These first records included by Mormon are essential in establishing our covenant relationship with God because not only does it reveal to us the identity of God and him as the sole object of our faith/loyalty, but in includes the historical records of the PROMISES God made to the Book of Mormon Fathers in specific regard to this covenant land grant  - AMERICA- and the people who reside on it. These records serve not only as a legal declaration of treaty between God and Lehi, Nephi, Jacob, and Enos, but they contain the actual historical setting and promises God made to them and all those who reside in this land.

The promises made by God to the Book of Mormon Fathers are many.  In fact so many that there is not the space here to fully enumerate them.  But here are a few to start:

“…And because thou art merciful, thou wilt not suffer those who come unto thee that they shall perish!” (1 Nephi 1: 14)

…But behold, I, Nephi, will show unto you that the tender mercies of the Lord are over all those whom he hath chosen, because of their faith, to make them mighty even unto the power of deliverance. (1 Nephi 1:20)

“And inasmuch as ye shall keep my commandments, ye shall prosper, and shall be led to a land of promise; yea, even a land which I have prepared for you; yea, a land which is choice above all other lands.” (1 Nephi 2: 20)

“And it came to pass that I, Nephi, said unto my father, “I will go and do the things which the Lord hath commanded, for I know that the Lord giveth no commandments unto the children of men, save he shall prepare a way for them that they may accomplish the thing which he commandeth them.” (1 Nephi 3:7)

“And it had come to pass that my father spake unto her, saying, “I know that I am a visionary man; for if I had not seen the things of God in a vision, I should not have known the goodness of God, but had tarried at Jerusalem, and had perished with my brethren. 5But behold, I have obtained a land of promise, in the which things I do rejoice; yea, and I know that the Lord will deliver my sons out of the hands of Laban, and bring them down again unto us in the wilderness.” (1 Nephi 5:4-5)

“And thus my father, Lehi, did discover the genealogy of his fathers. And Laban also was a descendant of Joseph, wherefore he and his fathers had kept the records. And now when my father saw all these things, he was filled with the Spirit, and began to prophesy concerning his seed— 18that these Plates of Brass should go forth unto all nations, kindreds, tongues, and people who were of his seed. Wherefore, he said that these Plates of Brass should never perish; neither should they be dimmed any more by time. And he prophesied many things concerning his seed.” (1 Nephi 5:16-19)

“And it came to pass after I, Nephi, having heard all the words of my father concerning the things which he saw in a vision, and also the things which he spake by the power of the Holy Ghost, which power he received by faith on the Son of God— and the Son of God was the Messiah who should come— I, Nephi, was desirous also that I might see, and hear, and know of these things, by the power of the Holy Ghost, which is the gift of God unto all those who diligently seek him, as well in times of old as in the time that he should manifest himself unto the children of men. For he is the same yesterday, today, and forever, and the way is prepared for all men from the foundation of the world, if it so be that they repent and come unto him. For he that diligently seeketh shall find; and the mysteries of God shall be unfolded unto them by the power of the Holy Ghost, as well in these times as in times of old, and as well in times of old as in times to come; Wherefore, the course of the Lord is one eternal round.” (1 Nephi 10:17-19)

This is why it is essential for our covenant future and that of our children to search these first records to identify the promises God has established in this legal treaty.  Without a knowledge of these promises we have no hope.  Hope in an Israelite mind is not wishful thinking, but it is the expectation based on a PROMISE, therefore without a knowledge of these promises we have no idea what we are to expect in this covenant relationship.  The historical record of the Book of Mormon Fathers demonstrates that a covenant keeping God made them promises and promises to their posterity and others in regard to this land.  They also demonstrate a fulfillment of these promises to them as each of the Fathers obtained a fulfillment of the promises by receiving the revelation of God and his Messiah, being delivered out of tribulation in their wilderness, and obtaining a land of promises (among many other things).

God having revealed himself to the Fathers and establishing his sovereignty over all things establishes the first pillar of our covenant relationship.  We are then presented with a choice will we accept his rule and pledge our loyalty to him as the center of our faith?  As we go down into the waters of baptism we make a formal declaration of our loyalty and our intent to obey the God of our Fathers (Abraham, Isaac, Jacob, Lehi, Nephi, Jacob, Enos). Having made a declaration of our acceptance of him and our loyalty to him, we must then search diligently in record of the Fathers to identify the promises God made to them and us as the recipients of their record.

Once we have identified the promises made, the journey really begins. We must lay hold upon the promises-- or in other words we must make a claim for the promises.  God is no respecter of persons; but in every nation he that fears God and works righteousness is accepted of him. (Acts 10:43) As a covenant relationship is bound by legal terms, we must also make legal requests under the covenant.  In other words, we have to ask for the promises to be fulfilled.