The School of the Prophets- Pathways Of The Prophetic 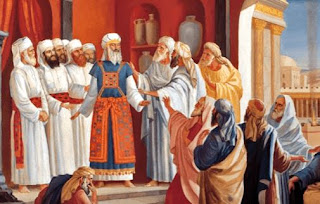 “But you who bond to YHVH your Elohiym are all alive today.” (Deuteronomy 4:4)

It is said by the sages of Israel that the prophets were bound to God through the Torah.  This teaching  communicated that as one studied the words of the scriptures they partook not only of the spirit of the Prophet who wrote the scripture but also of the Spirit of God that flowed through the prophet which gave utterance in the first place.  This understanding was one teaching communicated by the Fathers and preserved through ancient schools which taught and preserved the prophetic science of Israel.

Throughout the ages and in the wisdom of God there were noble and great spirits who were sent down as links of salvation to maintain or restore the ancient wisdom given to Adam.  Among these noble and great ones were Enoch, Noach, Abraham, Isaac, Jacob, Moses, and many of the prophets of Israel. These more advanced brothers and sisters were held in strategic reserve to come down in varying times and circumstances, but their mission was none the less the same-to implement the Plan of Salvation and to educate others in the science and principles of this redemptive plan:

“Now the Lord had shown unto me, Abraham, the intelligences that were organized before the world was; and among all these there were many of the noble and great ones; And God saw these souls that they were good, and he stood in the midst of them, and he said: These I will make my rulers; for he stood among those that were spirits, and he saw that they were good; and he said unto me: Abraham, thou art one of them; thou wast chosen before thou wast born.” (Abraham 3:22-23)

Even today we have those souls whose spiritual focus and development was such that they were predisposed to the revelatory enabling them to experience the visions and presence of God.  For example a young Joseph Smith who had not been schooled in the prophetic science and yet experiences a vision of the divine:

“At length I came to the conclusion that I must either remain in darkness and confusion, or else I must do as James directs, that is, ask of God. I at length came to the determination to “ask of God,” concluding that if he gave wisdom to them that lacked wisdom, and would give liberally, and not upbraid, I might venture. So, in accordance with this, my determination to ask of God, I retired to the woods to make the attempt. It was on the morning of a beautiful, clear day, early in the spring of eighteen hundred and twenty. It was the first time in my life that I had made such an attempt, for amidst all my anxieties I had never as yet made the attempt to pray vocally. After I had retired to the place where I had previously designed to go, having looked around me, and finding myself alone, I kneeled down and began to offer up the desires of my heart to God. I had scarcely done so, when immediately I was seized upon by some power which entirely overcame me, and had such an astonishing influence over me as to bind my tongue so that I could not speak. Thick darkness gathered around me, and it seemed to me for a time as if I were doomed to sudden destruction. But, exerting all my powers to call upon God to deliver me out of the power of this enemy which had seized upon me, and at the very moment when I was ready to sink into despair and abandon myself to destruction—not to an imaginary ruin, but to the power of some actual being from the unseen world, who had such marvelous power as I had never before felt in any being—just at this moment of great alarm, I saw a pillar of light exactly over my head, above the brightness of the sun, which descended gradually until it fell upon me. It no sooner appeared than I found myself delivered from the enemy which held me bound. When the light rested upon me I saw two Personages, whose brightness and glory defy all description, standing above me in the air. One of them spake unto me, calling me by name and said, pointing to the other—This is My Beloved Son. Hear Him!” (Joseph Smith History 1: 13-17)

Yet a point often demonstrated in the scriptures is that while there are those who are predisposed to the things of God there are many who are not so initially predisposed and are not as capable in the revelatory gift of Heaven or direct visionary contact with God:

Just as God knew that every person would have different capacities or gifts he prepared a way and a pattern whereby those who were of greater faculty would descend and lift up those of lesser or not so developed faculty.  The epitome of this being the Messiah himself who was greater than all and yet descended below all things to draw all men unto him; the greater through love and mercy lifting up the lesser into a condition of oneness.

As a result of their divine missions, many of these noble and great ones such as Enoch, Abraham, and Moses established schools or disciplines of learning whereby all could learn the art of redemption and the pathway of the prophetic. In these schools, students or disciples learned how to become spiritual and experience God.  Many of these ancient ones established schools for prophets wherein the newly initiated students were taught and discipled in the principles and science designed to reorient the mind and consciousness.  It was in these schools that awareness was cultivated of the Ruach Elohiym (Spirit of God) including its form and function that is the foundation of all life and reality here on Earth.

In sum, the students of these schools were educated in the laws, principles, and prophetic techniques to experience the dimension of the spirit alongside the reality of this world with the ultimate goal of connecting the two.  Walking in this strait/navigated and narrow path, one discovered that the gate into the spiritual was not accessed by some external means but through the secret of the inner passage- the passage of the neshama (soul/spirit).  Taught in the principles passed down by those who had ascended into the presence of God, these students would follow the same path to experience and ascend into the spiritual worlds- the kingdoms, the blessings, and the dangers.

An example of this discipline is plainly demonstrated by the Brother Jared in the Book of Ether. After traveling forth during the time of dispersion from the Tower of Babel, the Jaredites pitched their tents in a place they called Moriancumer.  They dwelt the space of four years at which time God visited the Brother of Jared with correction:

Do we really think that the Brother of Jared who had found favor with God, received direct instructions, and obtained deliverance for his people forgot to “say his prayers” for four years?  Hardly!

In prophetic science “Calling Upon the Name” is connected with an ancient spiritual discipline whereby the Prophet accessed the passage way of the spirit and connected with the divine.  This discipline is far more than the act of what has been taught as prayer in the modern world: “Heavenly Father- please bless  (fill in the blank) … I want a (fill in the blank) …  in the name of Jesus Christ.. Amen”.  It is far from the saying of ritualistic prayers out of rote repetition.

After the destruction of the Temple of Solomon, much knowledge and history was lost in regard to the path of the prophetic.  Still while many schools passed away in history, there were those that survived passing on much of this knowledge passed down by the Fathers. With the destruction of the Temple certain some doorways of the prophetic closed even while others were maintained by faithful men and women throughout the centuries.  Schools of the Prophetic continued to exist (some in secret and some by exodus) during the days of Messiah.  Even after the destruction of the Temple in 70 A.D. there were faithful students who continued to teach and preserve this knowledge even upon pain of persecution and death (some of which was brought upon by their own brothers).

Many of these disciplines exist today and have been well preserved in the scriptures and other related writings passed down in the House of Israel.  These greater things have been hid from the eyes of many Gentiles in plain sight “because seeing they do not see, and hearing they do not hear, nor do they understand.” (Matthew 13:13) This was done because this journey back into the presence of God was not a whimsical journey of intellectual curiosity. It was not a cinematic experience where we delight in 3D Visual Special Effects with popcorn and Jujubes.  It was also not a competition of egos or a path of self-aggrandizement.  It was a PROPHET(ESS) making venture not a PROFIT making venture.

The scriptures record the results of prophets and their connecting with Heaven. At first glance, while the scriptures record their prophetic results it seems as if no mention is made of any of the disciplines or techniques by which this connection was made. The language in which these records were communicated also contained the subtle instructions which have been by and large lost in translation.  The science of the prophetic was concealed in subtle aspects of the Hebrew language in which the texts were written.  The knowledge to unseal these nuances was transmitted in many of these ancient schools.

Posted by Mormon Yeshiva at 6:22 AM