Why We Have Need Of A Restoration: The Path Of The Prophetic 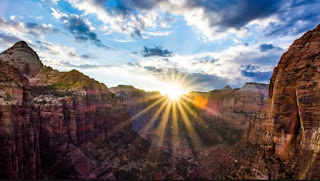 Many Ages have past since the civilization of Adam.  The conditions on this earth are but a shadow of the conditions that existed during the age when mankind enjoyed the direct presence of God.  Where there was once harmony there is now division.  Where there was once further light and knowledge we wallow in conditions of darkness and ignorance.  Yet God from the beginning knew the course that mankind would take, and in this foreknowledge he established a perpetual House upon whom would rest the responsibility of preserving the foundation stones of the Ancient Order of things upon which future generations could build upon to elevate and transform the conditions of darkness into brilliant light.  It began in the days of Adam and was passed down through each successive birthright house from Enoch to Noach, from Noach to Abraham, from Abraham to Israel, and from there Israel seeded to to all the nations of the earth.

In this seeding, scriptures have been preserved that record God's dealings with mankind along with their respective cycles of spiritual birth, adolescence, maturity, and decline.  They have been presented to us through the various religious bodies upon the earth; each with their own accompanying traditions, biases, and authority structures- both the good and the bad. Almost like a pendulum, the spiritual state of mankind swings in varying motions of rhythm between polar extremes as if it can never come to state of harmonic balance.  Exposed to the extreme of power and structure mankind flees the resulting tyranny.  Exposed to the extreme of mercy and grace mankind flees the resulting chaos. It is in the tension between these two extremes and the constant struggle mankind exhibits, that our adversary obtains and exerts power either on the one hand or the other, yet neither extreme providing the state of peace and oneness with God that humanity so desperately hungers for.


During the time of Adam and the patriarchs, mankind existed in a state with a much greater scope of consciousness than what exists today. According to the teachings of the sages of Israel, prior to the fall, Adam and Eve could visually and physically pass from one world to another.  In other words, Adam and Eve could ascend and descend the various levels of spiritual kingdoms without anything being lost or obscured.   In one sense it was as if Adam had a mental and spiritual I.Q. of say 10,000 compared to the "geniuses" of our day with a mere IQ of 160 or 170.   Much of our capacity was lost during the fall and the subsequent "de-evolution" thereafter.

With each successive age, the distance between man and God grew greater until the cycle of darkness had reached it's darkest depth.  At the point of greatest darkness, a light burst forth and through an infinite and eternal act of Messiah the cycle of return commenced.  In order for us to return to a state of full oneness with God, mankind was once again given the path to return to the full faculty of spirit that existed in the foundation of creation.  Just as the results of the fall created a state where we could no longer fully experience physical and spiritual reality simultaneously, an infinite and eternal sacrifice opened the door where heaven and earth could connect or bond (devekut).

It was only through  God's great plan of healing and rehabilitation could this transformation from fall to ascension take place. The entire plan of redemption revolves around restoring what was once lost.  In doing so we gain the further light and knowledge needed for the transformation of self, mankind, and the earth itself.  From Abraham to the schools of the Prophets in ancient Israel, the science and discipline in the prophetic was preserved and passed down.  The purpose being to prepare as many as would so choose to return to the balance between the physical and spiritual realms thereby connecting heaven and earth.  Once connected, those so connected could unleash both the preservative power and trans formative power of that which exists in the eternal realm following the first law given to Enoch and his Zion-- As Above So Below; As Within So Without.

THE HOLY MANNER OR PATTERN OF ELOHIYM


As disciples of Messiah, we too have chosen to walk this path.  Whether it be called Torah, The Way, the Truth, or the Light- it is nonetheless the same spiritual science and discipline that existed at the foundations of the Earth.

"Now Melchizedek was a man of faith, who wrought righteousness; and when a child he feared God, and stopped the mouths of lions, and quenched the violence of fire. And thus, having been approved of God, he was ordained an high priest after the order of the covenant which God made with Enoch, It being after the order of the Son of God; which order came, not by man, nor the will of man; neither by father nor mother; neither by beginning of days nor end of years; but of God; And it was delivered unto men by the calling of his own voice, according to his own will, unto as many as believed on his name.

For God having sworn unto Enoch and unto his seed with an oath by himself; that every one being ordained after this order and calling should have power, by faith, to break mountains, to divide the seas, to dry up waters, to turn them out of their course; to put at defiance the armies of nations, to divide the earth, to break every band, to stand in the presence of God; to do all things according to his will, according to his command, subdue principalities and powers; and this by the will of the Son of God which was from before the foundation of the world.

And men having this faith, coming up unto this order of God, were translated and taken up into heaven.  And now, Melchizedek was a priest of this order; therefore he obtained peace in Salem, and was called the Prince of peace. And his people wrought righteousness, and obtained heaven, and sought for the city of Enoch which God had before taken, separating it from the earth, having reserved it unto the latter days, or the end of the world; And hath said, and sworn with an oath, that the heavens and the earth should come together; and the sons of God should be tried so as by fire.

And this Melchizedek, having thus established righteousness, was called the king of heaven by his people, or, in other words, the King of peace."  (JST Genesis 14)

While the language the message is delivered in is designed to both reveal and conceal. The reality is that often in simple words, great knowledge and disciplines from the Fathers are conveyed for those who inquire.

Silencing, Descending, and then the Porch of YHVH:


The first step in this walk is in setting ourselves apart walking in the paths of the holy versus the paths of the profane. Just as Nephi withdrew in his pondering before his Apocalypic Vision, just as Lehi dwelt in a Tent before receiving his Apocalyptic Vision, so too did Abraham, Isaac, Jacob, Ezekiel, and Elijah withdraw from the profane before bonding or communing with Elohiym.   While society would have us embrace the path of chaotic mixing like the chattering voice of the monkey mind, God would have us embrace the path of holy solace first by descending in quietness and humility before ascending.  Our minds and lives are going too fast, too chaotic, and too frenzied to hear the voice of the Most High.  Our souls are too undisciplined to adhere to his word while feeling our way along the path to the Tree of Life.  Just as Messiah silenced the questioning voice of Ha Satan so too must we follow suit by silencing his doubts, chatter, and questioning in our hearts and mind to hear the voice of the Most High.