WHY A HEBREW ROOTS BOOK OF MORMON 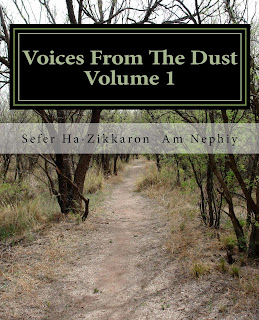 Voices From the Dust Volume 1: The Record of the Nephiy

The Book of Mormon is an ancient covenant record written and preserved by a remnant of the House of Israel to come forth to a remnant of their posterity in future time to prepare them for a Great and Marvelous Work to come forth by the Hand of YHVH (God).  Knowing that their future posterity here in the Americas would be destroyed and scattered by the Goyim who would come upon this continent, God through his prophets here in the Americas preserved this record and covenant land grant that would be the foundation upon which their scattered posterity and those who would associate themselves with them could once again be restored as a body of the House of Israel.

There are those who ask, "Why a Hebrew Roots Adaptation?"  The answer is that the writers of the the Book of Mormon were Jews or rather citizens and descendants of the Southern Kingdom of Israel. As such the record contains many guiding truths and covenant betrothal gifts from God to his people meant to establish them in the land and prepare them for his coming in Glory.  The Book of Mormon is not the property of any religion but is the birthright of the heirs of the remnants of Israel to who this record was intended.  As the writers were Jewish Prophets and their descendants who were taught the knowledge of Israel and it's ancient prophetic tradition, the record contains the foundational knowledge by which this modern remnant of Jacob, those believing Yehudim, and those believing Gentiles may once again be established as a righteous and covenant keeping people before YHVH (God) on this land of America.

When it was first translated (abt. 1830) the record came forth by the power of God through the hands of a Gentile to a body of Gentiles who were then to take the record to the remnant of Jacob on this land.  As it was a translation, many names, phrases, and terms were translated to engage the people of the day who were primarily people of Christian origin, but who had no real background in the language and culture of the Jews who wrote the record.  As such there were many phrases and names used which English speaking Christians would understand but which would be foreign to those from and Israelite/ Jewish origin.  This is mentioned not to denigrate the Gentiles and people whose additional sacrifices took this record to the world.   It is just that your average christian in the 1800's would not understand or have a religious context for concepts and names in their Israelite form; such as Torah of Moshe, ma'asim, takanot, misphatim, chukkim, etc.  They would however understand the terms Law of Moses, works, ordinances, judgments, statutes, etc.

The purpose of this work is to present the Book of Mormon in a form more closely aligned with the nations and people of Israel.  It is formatted using a Jewish scribal poetic form meant to capture the Hebrew block structure and meaning of the passages contained within the record.  While the intent of the format was meant to capture this block structure this adaptation was not meant to intentionally organize the record into chiastic structures and yet while following some of the Israelite scribal rules that could be applied many of these chiastic structures and Hebrew parallelisms naturally revealed themselves.  In addition, there were other precious gifts and prophecies discovered that were only revealed in the passages once arranged into this format.

It is my hope and intention to build a bridge between the receivers of this records and the Israelite Prophets and culture who spawned the record. For those who seek to understand and embrace the displayed and hidden gifts presented in the Book of Mormon, it is my hope that this adaption will assist in turning the hearts of the Children to the covenant God made with their Fathers: